A day that seemed straight out of NHL 94

Share All sharing options for: A day that seemed straight out of NHL 94 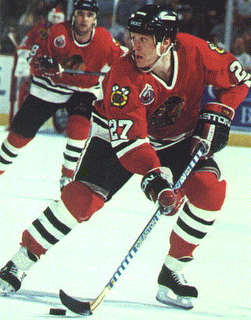 I'll leave the real analysis to the SJ bloggers, but few days of NHL hockey truly made me think of video games (and made me old-time nostalgic) quite like the couple of Game 7s we had tonight.

Due to bad TiVo planning I only saw the OT GWG in Capitals - Flyers. But that was enough to see what might be the most NHL 08-like goal I've ever seen. Seriously, watch the replay of that goal.

Does that not remind you of one of those agonizing rebound goals...when your goalie just sits there like a doofus while your opponent scores a bullshit goal? Huet's head was just flat out frozen in the wrong direction like bad AI. (It even had Bill Clement's voice...seriously)

If that wasn't enough to make you think of hockey video games, the Sharks - Flames game was dominated by the penultimate hockey video game god, Jeremy Roenick. Can you believe he had 2 goals and 2 assists?!!!?!?!?

Say what you want about JR, but the guy's friggin' money. Going into this season, if someone told you that Roenick and Curtis Joseph would have weighed heavily in a huge playoff game, I would have said "Classic Sports doesn't count."

Stars - Sharks should be entertaining as hell. Preview(s?) coming soon...