Share All sharing options for: Do what you do best... 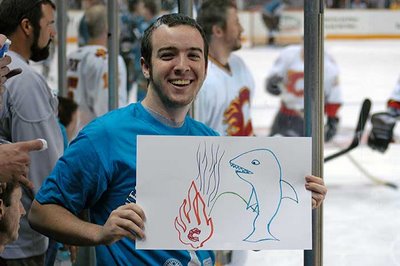 ...and that is for the Sharks to kick ass on the road. A few tidbits of news before tonight's game:

-While Mike Keenan's being his usual self and bitching about the refs, most of the Calgary media is not. In fact, they're being surprisingly objective for local media and blaming the team for taking stupid and selfish penalties. That's really refreshing, and I guess it shows the difference between the Calgary media and some bozo in Ottawa.

-I expect the refs to be closer to Game 2 (call a bunch of stuff even though you miss a bunch of stuff on both sides) than Game 1 (let them slash the hell out of each other); you have to remember that the directive, starting all the way from Gary Bettman and Stephen Walkom down, is to actually focus on stick/holding infractions. Regardless of what Keenan says, I'm sure the refs are more intimidated by their bosses rather than one of the coaches.

-Christian Ehrhoff skated yesterday and, presumably, today. Ron Wilson is mum about whether or not he'll play, but I'm guessing he will considering how bad Kyle McLaren has been.

-Keenan's experimented with a few different line combos during Saturday's practice, flipping Craig Conroy and Daymond Langkow on the first and second lines.

-A word to Joe Thornton: They're cutting off your passing lanes. Shoot the puck more. It'll help, I promise, especially on the power play.

-A word to Patrick Marleau, Ryane Clowe, and Joe Pavelski: Keep it up.