Before we get into that post title topic, I thought I'd start with a little number-crunching first. I made a table that's complex, but I think it shows what’s going wrong with the Ducks. It segments the series by manpower situation and scoreboard deficit, and shows minutes, goals, and shots:

First off, there’s an easy problem to spot in the row titles—the inability for the Ducks to play with the lead. Three times the game has been tied, and three times Dallas has scored to break that tie. This can be pointed directly at special teams; in tie-game situations, the Ducks have only generated 5 shots on goal on 4 full power plays. Additionally, the Ducks have yet to make a save on a Dallas power play when the score is tied.

Falling behind isn’t the biggest issue, though; I’m much more agitated by what happens afterwards. I’ve broken the table down by actual deficit, but here’s the summary: in the nearly 93 minutes that the Ducks have been trailing, they’ve been outshot 27-57, and have earned 5 power plays to the Stars’ 11. Compare that to the "tied game" row, where the Ducks have outshot Dallas 18-10 and earned 4 power plays to the Stars’ 2.

I’m no coaching genius, but it seems to me that the worst response to falling behind in a game is to employ the "shoot less, allow more shots, and take more penalties" approach that has been plaguing the Ducks. Now of course I realize this result isn’t the intention of the coaching strategy, but it’s the postseason—intentions don’t matter nearly so much as results do. And if this represents what we can expect when the Ducks are facing a deficit, then really there’s only one option left—never trail again.

As I noted in today's Ice Sheet, every playoff team has picked up a win this spring except for two: your cup finalists Anaheim and Ottawa. I hope the Ducks can find a way to trim that list tonight. Aside: I'm not data-gifted enough to do this analysis for more than a couple-game sample, but I would be interested in seeing more team stats broken down by score (tied, leading, trailing). My eyes and my gut tell me that coaches and teams approach these situations differently, but I don't have the data skillz to quantify that for a large sample of games.
---------------------------------------
Anyway, enough with the numbers, it’s time for some bargaining! Now I really had no idea that my posts on this series would evolve into a series on the Five Stages of Grief, but hell, I’ve already gone through Denial and Anger, so I guess today’s theme is "Bargaining". 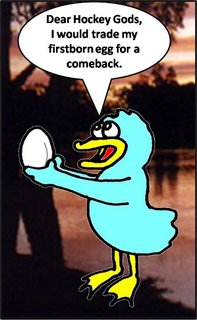 I'm no psychology whiz, but as I understand it, the Bargaining Stage involves variations of the phrase, "If only x can occur, I pledge that I will do y." In this case, it's a plea to the hockey gods, and I'm sure it's something that all BoC fans might be interested in.

For Ducks Fans:
"If the Ducks can (get a lead tonight / win the series / convince Bertuzzi to retire this summer), I promise to (say sorry to a Sens fan / lay off the referees / name my daughter Teemu)."

For Sharks Fans:
"If the Sharks can (hold a lead tonight / win the series / get some postseason production out of Joe Thornton and Brian Campbell), I promise to (hang a toilet seat on my wall / lay off Ron Wilson / trade a quality player to Boston)."

For Kings fans:
"If (the Ducks and Sharks can both lose miserably / Tampa forgets to pick Stamkos / the Kings win a cup in the next 20 years), I promise to (take a shower / take a bath / take a breath mint at least)."

Or whatever. If you've got a story about a pledge to the hockey gods you once made, or want to make a fresh promise for the dire BoC situations this year, go as crazy as you want in the comments. You only have to convince the hockey gods; Blogger is legally powerless to hold you to anything.

Prediction: Here's the deal, hockey gods. You make the score Ducks 4, Stars 1, and I promise I won't stomp anybody's shin. Well, at least not on YouTube. Goals by Selanne x2, Pahlsson, and Carter.