Ah, good ol' Game 83, time to break out some playoff traditions. Last year I started a gimmick each series where I played "Separated at Birth?" comparisons with opponent team logos. It wasn't by any means a very serious exercise, but it worked out well enough to give it another go this year.

Here is last year's set: the Minnesota Wild, the Vancouver Canucks, the Detroit Red Wings, and the Ottawa Senators. So take a glance below; which image is most "Separated at Birth" from the Stars logo? Vote for your favorite in the comments, or feel free to suggest your own. 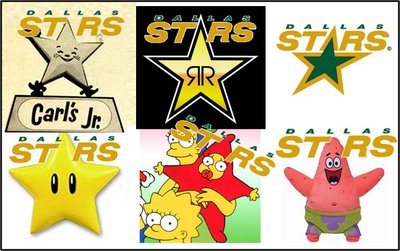 
Last night was an interesting Day One of the playoffs. In 3 of the 4 games played, a team quickly lost home ice advantage, which is a bit frightening. I made a late-night PuckToon about it over at Fanhouse (a feature I plan on resuming now that I'm attached to a scanner again; also on a side note, starting next week I'm writing their Ice Sheet each Wednesday).

To tell the truth, I'm not that stressed about game one, but that's because I'll be tracking tonight's game on my cell phone. I'm caught in a prior engagement and can't watch the game live, but it's not the worst thing; generally it's less stressful to scoreboard-watch than it is to yell at the TV for three hours. By the time I do watch the game late-night on my DVR, I'll already know the outcome, so feel free to comment on any game observations—you won't be spoiling anything. [EDIT: Spade's got some good Turco strategies on his new blog, complete with diagrams!]

I do have tickets for game 2, though. More on that later.

One player to watch for tonight will be J.S. Giguere, just to see whether he actually plays. Two years now I've been fooled into thinking Giguere would start the playoffs, only to be surprised by Bryzgalov at gametime; would they dare trick me a third year in a row?

Prediction: Ducks 3, Stars 2. Goals by Selanne, Pahlsson, and Schneider. And so it begins.