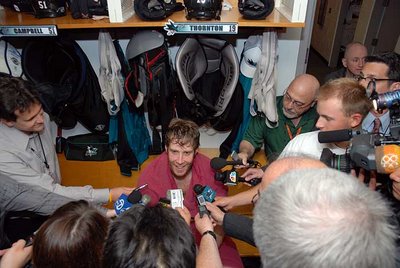 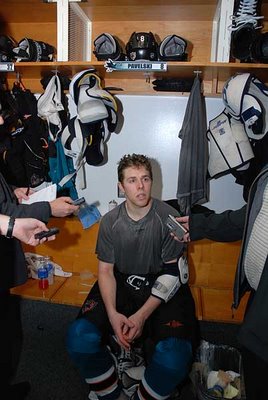 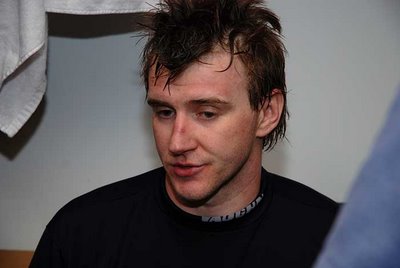 A few locker room photos after the Sharks 2-0 win over the Calgary Flames to even up the WCQF series. The media coverage in San Jose has increased ten-fold with the influx of Canadian Press, and the number of local television stations sending camera crews to the tank. They came in two waves, with the local media and television crew getting their questions and footage first, followed by the Canadian press after their time in the Calgary locker room.

Evgeni Nabokov mentioned that the Sharks needed a big win because they could not head to Calgary down 2-0, it would put a serious hurdle in front of them against a very good team. In the post-game press conference, long time SJ Mercury News opinion columnist Mark Purdy asked San Jose Sharks head coach Ron Wilson if he ever has to say anything to Nabokov before a game. Wilson said no, Nabokov is the expert on goaltending. With a few minor exceptions, he self motivates and battles hard from start to finish (as seen in the skills competion and 2nd shutout period of the ASG).

Joe Thornton noted the Sharks intensity from the drop of the puck, something that did not happen in game 1. The Sharks still looked tentative with the puck at times, even with 7 second period penalties by Calgary, but overall they moved the puck well out of their own zone. The addition of Matt Carle in place of Alexei Semenov, and a hard charging Brian Campbell initiated the offense and contributed to the Sharks dominating time of possession with the puck. After the game when asked about a physical checking series, Ron Wilson said you can not hit someone when you have the puck. The more you have puck possession, the less hits a team will register.

Joe Pavelski's line, with Patrick Marleau and Ryane Clowe, did the bulk of the damage for San Jose. Pavelski opened the scoring with a critical second period goal, the Sharks were 38-13 in the regular season when scoring first. Pavelski also mentioned that he wanted to take full advantage of postseason opportunities given to him after he was a scratch for several playoff games last year.