It's About What You Expected

Share All sharing options for: It's About What You Expected

Comedy is hard. Most comedians in show business are lucky if they can have one movie (usually their first) that can be considered a legitimate contribution to comedy. After that, they usually have to settle on repeating their routine while hoping no one gets sick of it. Every comedian basically has a niche: Chevy Chase is a deadpan jerk, Jim Carrey does insane things with his face, Adam Sandler gets angry, etc. These niches signify something unique that audiences have not seen before and the comedian becomes famous.

Eventually, however, every comedian reaches a point where their act becomes too recognizable to the public and they eventually get tuned out. This usually leads to embarrassing displays as now powerful comedians are given too much rope that they use to hang themselves. Even the greats like Steve Martin (Bringing Down the House, The Pink Panther) and Eddie Murphy (The Adventures of Pluto Nash, Holy Man, The Haunted Mansion, I Spy, Daddy Day Care... Christ) end up humiliated in their desperate attempt to get that one last laugh.


I've mentioned this movie before, when I bemoaned the news that Justin Timberlake would be wearing a Kings' jersey. Sadly, he looks like the best part of the movie. Not only is a tired rehash of stuff Myers has only done before, ("Hey look! He's playing a foreigner!" "Hey, he's saying midget over and over again just like that 'mole' bit from Austin Powers 2!" "Hey, he's doing a retarded, unfunny bit that goes on 30 seconds too long!") but it just looks sad. Verne Troyer as a Russian coach? Jessica Alba as someone who is capable of thought? Directed by the guy who wrote The Librarian: Return to King Solomon's Mines??? (Okay, that's actually awesome because Noah Wyle is hilarious, but the rest of my points stand.)

I actually kind of feel bad for Mike Myers. He's doing the same bits that made him famous in the '90s, but he's going to get destroyed this summer by movies like Forgetting Sarah Marshall and The Pineapple Express, movies that are far more adult and grounded in reality. Comedy, like hockey, is a young man's game; hopefully Myers can just retire with some measure of his dignity intact. 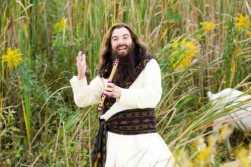 
(The saddest thing about Myers is that he's not going to be remembered too fondly by future generations. What movie did he create that will be remembered as a hallmark of comedy? Wayne's World? Dana Carvey made that movie. If anything, he serves as a precursor to comedy like Family Guy. Way to go, jackass.)