Tonight was a close one. I made a very un-clutch move and only Tivo'd the Stars-Sharks game according to its Guide listing of 6-9. This made the OT period just that much more agonizingly intense, since there was a voice in my head that kept screaming, "The end of this game lies beyond that invisible 9:00 p.m. barrier, dipshit."

Amazingly, Mattias Norstrom's OT GWG happened around about 8:59.99 p.m. or something, and I just managed to see the win for the Stars.

I don't have much to say since working late sapped my already limited Tivo-hockey guruship*, but I'll provide a few miscellaneous thoughts:

It just goes to show you that perception is everything. Although I do admit there is a lack of drama, it's not like last year's playoffs was a pulse-pounding thrill ride either. (Only one Game 7 I believe, no Cinderella story of note...*yawn*)

Sleek loves the '07 playoffs for obvious Duck-related reasons and Stars fans think this year's playoffs could be called an edge-of-your-seat-thriller for the same, simple reasons. It's just interesting that perspective plays such a big role in a person's enjoyment of the playoffs (though any hockey fan will tell you that the NHL's postseason consistently destroys most other sports'). 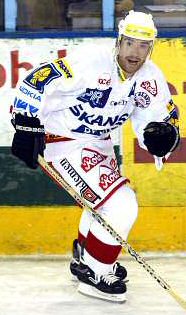 That has to be the worst bit of in-game advertising this side of Swedish Elite Leagues.

* - I'd like to blame fatigue for making up a lame word like guruship, but that's just what I do.