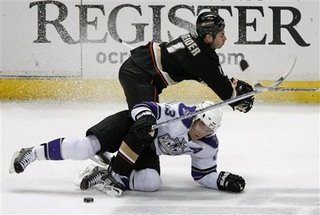 So I guess the Kings aren't going to make the playoffs. I thought they still had a chance, but I checked the standings today and nope, they're eliminated. I guess there's only one thing left to do: injure as many Ducks as possible.

Now, I know that may seem unsportsmanlike, maybe even barbaric. Yeah, it is. But seriously, do you want the Ducks to win another Stanley Cup? I'd rather sit on my balls than let that happen again. Besides, it's not like they don't deserve it. Chris Pronger's an asshole, Ryan Getzlaf has a stupid face, Teemu Selanne takes naked steams with other men, Mathieu Schneider steals from supermarkets, Bobby Ryan was behind the Mai Lei massacre, they're all bastards. Fans around the league would thank the Kings and they'd be hailed as heroes if they took out at least one Duck. We'd be like that dog in that game with ducks... there was some sort of hunt... oh yeah, Halo. 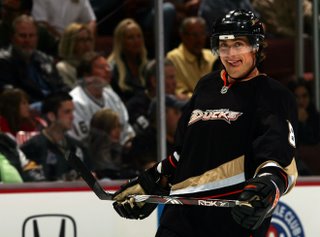 We'll see how happy you are without that tongue

So, here's what you're going to do:

Zeiler, you're miserable, you get Pronger. Try to stomp on him, get some irony going.

Frolov, you take out Pahlsson. He'd never expect it.

Brown, you get Rob Niedermayer when he comes after Frolov. You could injure him physically, but I'd suggest reminding him how he'll never match his brother's accomplishments. Maybe you can get him to cry and give up.

Giuliano, you get Getzlaf. Fake being a "Make a Wish" kid, he'd never expect it. 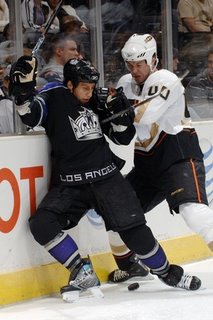 His wish was to be a marginal NHLer.

That should do it, I'd say. The Kings haven't done much to earn respect in the NHL this season; do this, and I bet we could get a someone to trade us an actual defenseman for next season. 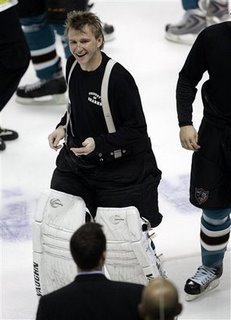 This isn't apropos of anything, but I'll be damned if it didn't make me giggle.


Prediction: Kings lose, 5-2, goals by Visnovsky and Handzus. Blake confuses everyones when he takes a slapshot with a 9-iron; he would say later that he just wanted to get in a little practice before the off-season.