Kings-Sharks Gameday: Is This My Life?

Share All sharing options for: Kings-Sharks Gameday: Is This My Life?

I spent last night listening to the Hurricanes-Lightning game. I'm not proud of it. It's not quite bottom; I'm not on message boards arguing with Lightning fans over who deserves Stamkos more. But I'm getting close. 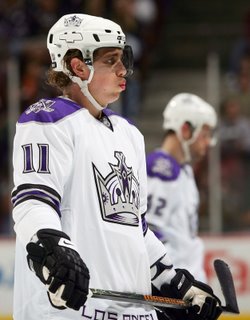 The Lightning lost last night, putting them at 71 points with 2 games left to play. The Kings sit at 69 points with 2 games left. Basically, Tampa needs to win 1 game and the Kings need to lose 1 for the Kings to clinch the bottom spot. The saddest thing is that I don't even care if the Kings get Stamkos that much. Sure, he's good, but he's not vital for Los Angeles. We have a franchise center already and defenseman is more of a need. I'm not saying that the Kings shouldn't draft Stamkos, I'm just saying that it wouldn't be the worst thing in the world if we didn't get him.

So why do I want the Kings to finish last? I think I just want the Kings to be the worst team in the league because then they can't get worse. If they're last, then next year they'll be guaranteed to improve at least a little bit. Pathetic, I know, but it's the truth.

On the opposite side of things, San Jose still has a slim possibility of winning the President's Trophy. If they win their next 2 games (against LA and Dallas), and Detroit loses their next 2 games (against Columbus and Chicago) without going into overtime, then the Sharks will take the top seed in the West. That's kind of incredible if you consider the Sharks struggles early in the year and how much whining San Jose fans did during that time. Is Ron Wilson's job safe yet?

Jonathan Bernier looks to be headed to Manchester now that his season with the Lewiston MAINEiacs (ugh) is over. He'll split duties with Johnathan Quick until the Kings end this weekend, at which point Ersberg will head down to Manchester and Quick will go to Reading. Hopefully Bernier can follow in Carey Price's footsteps and do some damage in the AHL playoffs to set himself up nicely for next season.

In other Manchester news, Ted Purcell and Brian Boyle were both named to the AHL All-Rooke team. Also selected was Bobby Ryan, which of course makes him a better draft selection than Jack Johnson.

Prediction: Kings lose, 3-2. Goals by Willsie and Cammalleri. Joe Thornton gets lost in Alex Frolov's eyes and plows into a goal post, receiving a concussion that knocks him out of the playoffs. San Jose commits communal suicide.