The Legend of Crankshaft continues to grow, Canada discovers the UberTap and Sharks defenseman Douglas Murray

Share All sharing options for: The Legend of Crankshaft continues to grow, Canada discovers the UberTap and Sharks defenseman Douglas Murray 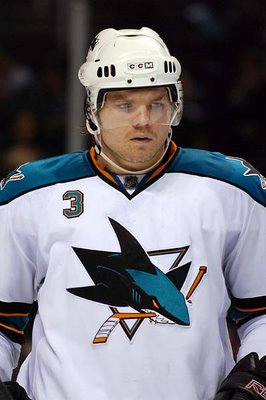 Some say he is half man, half machine, half reciprocating linear piston, but 6-foot-3 240 pound Cornell alumni Douglas "Crankshaft" Murray also showed his entrepreneurial zeal investing in the UberTap Dispensing Company. The revolutionary three spout keg dispensing system offers a hands free filling experience, a "superior pumping method", and a consistent flow of beer. Something that should warm the heart of Canadians and Americans alike, and also those in Murray's hometown of Stockholm, Sweden.

Murray may be known for patrolling the blueline for the Sharks as they face the Flames in their opening-round playoff series, but sports fans of all ilk must appreciate what he and friends came up with in between their scholastic and sporting endeavours in their college days.

UberTap is a system that uses a foot pump to extract the liquid gold, and three spouts to fill the glasses. Imagine that. Three glasses being filled simultaneously. To borrow phrase sudsy connoisseurs know -- brilliant.

"It took too long to get beer in college. It's about five times as fast to fill up," Murray said. "Since I've been in the NHL, I haven't been involved as much, my partner is running it. When I was in the minors, there was more time."

[Update2] A Salute to an Unsung Hero: Doug Murray (from Sweden) - Rudy K for Battle of California.

"It's more being aggressive and assertive at the right time," says Murray, who unloaded a team-high 127 checks, many of the heavy variety. "I've always been an aggressive player. Physical. A big thing is not putting myself out of the play doing the physical part of the game. More picking my spots and letting the hits come to me. Guys are smart in this league -- they know you're coming. The good players use that as an advantage."

A classic late bloomer -- drafted 241st overall in 1999, out of something called the Eastern Junior Hockey League while toiling for a club named the New York Apple Core (really) -- Murray needed two full slates with Cleveland of the American Hockey League to get his pro bearings
"He's been excellent, right from start to finish," say Craig Rivet. "He started off this season by winning a job. He's really moved himself up the depth chart. You can see that he's logging some big minutes. He's extremely difficult to play against. He's as physical as any defenceman in the league."...

Might Murray also be the most improved player in the NHL? "Hands down, he would be on our team," says Rivet. "Throughout the league, I'm not quite sure because I don't pay attention to a lot of other people's players. But we've been blessed that this guy has grown and made this team that much stronger."