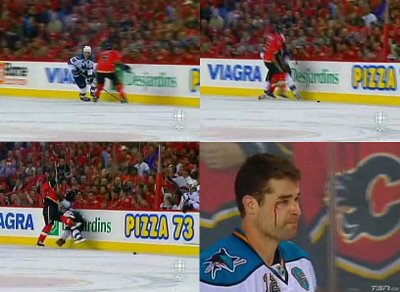 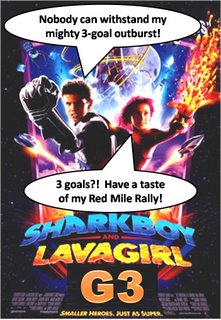 Best I could muster on short notice. --Sleek

I always feel a little wary about taking a really fast multiple-goal lead. It gives way more than enough time for a team to pull it together. That's what happened tonight, but it still doesn't excuse anyone from tonight's Sharks meltdown against Calgary.

1) Joe Thornton isn't doing anything other than making stupid passes. I understand that he's being pressured like no one's business, but damn it, he knows how to control the boards. That's his freakin' game. That's what's so aggravating about this.

2) Brian Campbell was brought in as a #1 defenseman. He played like a #1 defenseman for the rest of the regular season. So far, he hasn't just looked mediocre, he's probably been the worst Sharks blueliner aside from Kyle McLaren. They really, really need Christian Ehrhoff and his speed back.

3) Milan Michalek hasn't used his speed to back off any of the defensemen. Patrick Marleau's done this very effectively so far, so you know that it will work. Michalek can't keep trying to play his game on the boards because that's NOT his game. He's gotta take the puck through the neutral zone, back the defensemen off, and create more space for Joe Thornton to thread the puck through.

The good news? They're only down 2-1. You split in Calgary and then it's a 3-game series. It's not going to be pretty, but the series is far from over. The Marleau line's been great, the Mike Grier/Patrick Rissmiller/Torrey Mitchell line has done what it should be doing; it really comes down to Joe Thornton and the defense.

Big Joe, Soupy, the focus is on you. Since they're living together, maybe someone's poisoned their water or something. Someone's gotta lace it with Red Bull or something.