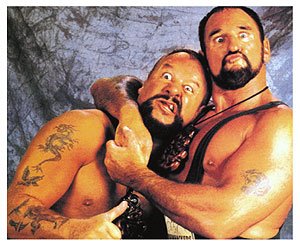 Well, so much for the Ducks running scared...

Game 5 was one of the best games I've seen in the '08 playoffs. One of those games that makes you mindlessly mutter the words "I love hockey." And I'm fairly certain it wasn't just because I watched it in the sparkling glory that is HD.

(HD and hockey go together like peanut butter and chocolate; Spezza and Heatley; even Bushwhacker Luke and Bushwhacker Butch)

I'm a little concerned, however, that I might have jinxed the Stars. Or is it that Sleek reverse-jinxed the Ducks? I'm on the fence on that one.

Either way, it's going to be a tense game or two for the Stars. Even though the Ducks won and were the superior team at home, the Stars haven't looked out of place very often in this series. Still, it's worrisome for the Stars that the big bad '07 vintage Ducks* seemed to make a frightening return.

This is that tough-as-nails W4 that keeps eluding this franchise. Game 6 (and 7 if necessary) is why the Stars mortgaged a good part of their near future for Brad Richards. The Stars want it more than the Ducks. Now they just have to take it.

*Todd Bertuzzi still sucks though. Even his teammates are getting tired of his un-shooting. He needs to attend a Passaholics Anonymous Meeting with Ales Hemsky and Alex Tanguay.