The biggest crime a player can commit is to not care. Guy gets a DUI? Beats his wife? Gets in a bar fight? That's okay with fans as long as he yells, "Fuck!" when the other team scores a goal. It shows he cares. Guys like Joe Thornton or Alex Rodriguez, who have pretty much the same look on their face no matter what? They are lazy, or cowards, or just indifferent to their sport in general. It doesn't matter how many assists they compile or how many home runs they hit, they'll never be fully accepted into the Pantheon of Sports Gods. It doesn't even have to be great players: people seriously wanted Ladislav Nagy (26 points in 38 games) benched for John Zeiler (1 point in 36 games) because Zeiler "looked like he cared out there." 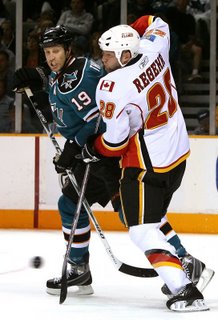 Joe Thornton scored 96 points this season while the next highest Shark amounted 55 points. He was the 2nd biggest reason (besides Nabokov) the Sharks secured the 2nd seed in the Western Conference. Then the Sharks played 3 games and lost 2, obviously because of a fatal flaw in Thornton's character. Nevermind the fact that Milan Michalek has yet to tally a point and Johnathan Cheechoo has 1 assist. Nevermind that Brian Campbell has played his worst hockey since joining the Sharks and Evgeni Nabokov has looked surprisingly normal. Nope, the real problem is the guy averaging a point a game while the opposing team is gearing their entire system around him. Yep, let's blame that guy. 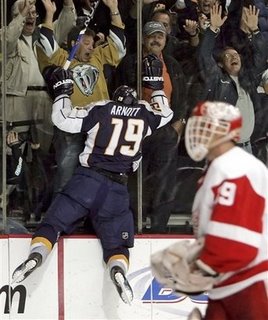 In contrast, look at Jason Arnott. He's the captain of the Nashville Predators as well as their leading scorer. He was pointless until last night (when he scored a goal), but he has yet to receive any real criticism. Why? Because he does things like curse out loud and break his stick and (when he finally scored) jump into the glass and twist his ankle. Oh, and he wasn't drafted first overall so he didn't have unreasonable expectations placed on him. (He was drafted 7th overall, by the way.)

Joe, if you're reading this (and I can't imagine why you wouldn't be), let me give you some advice: try to break your stick tonight. Wait until you make a beautiful pass and Cheechoo mucks it up and just slam your stick into the ice. You don't have to change the way you play* or give some big dramatic speech to your teammates or anything like that; all you have to do is break your stick. You can do what you have been doing (you know, creating goals) but all you're going to hear is how you couldn't carry your team on your back when the game was on the line. And honestly, I bet that's really fucking annoying.

Prediction: Sharks win, 4-1. Thornton assists on all 4 goals and is criticized for passing off responsibility.

*Also, a common criticism I've heard about Joe is that he's not shooting enough. You know why he doesn't shoot, right? Because his shot sucks. I'm pretty sure Marty Turco has a better shot than Joe Thornton. His goals are set up because the goaltender is expecting him to pass. He's like Steve Nash in a way: you take away his passing lanes and make him beat you himself. It's effective because the goalie knows he can't pass and can concentrate on his shot, making him incredibly unlikely to score. That's why he doesn't shoot.