So, did I miss anything?

Share All sharing options for: So, did I miss anything?

I haven't seen a lick of G1, and aside from what I'm bound to see in highlight reels, I don't really intend to watch it. I got the gist of it off my cell phone, and as it's a "write it off" game, I'll be much more effective with untainted eyes. Still, it had to have been hard for Ducks fans who did watch, or even attended the game. Sorry, folks. Lucky green shirt wasn't available, but it will be there for game two (which personally I'm calling "game one").

Still, Duck fans, chill out. It's like none of you have ever seen Mighty Ducks Part 2 before. 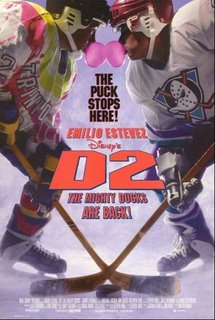 First off, there's no team more Icelandish in the NHL than the Dallas Stars and their collection of Finns + Norstrom; of this there can be no doubt. Meanwhile you have the Ducks, fresh off their triumphant championship at the end of the first film, who start the sequel way too overconfident and get sloppy. Iceland demolishes them in the preliminary game, crashing them back down to earth, and they have to dig deep to re-establish the identity that made them great. I don't want to spoil the end of the movie (or the series) for you, but if you've got any old-school Mighty Duck jerseys, you might want to bring them in case the team switches uniforms for the 3rd period.

Historically speaking, G2 will be the breaking point. The Ducks have never lost a series when they have taken at least one of the first two games; they have never won a series when they started 0-2. That's flimsy, of course, but what else is there to do but take a deep breath, say a little prayer to the lucky green shirt, and hope for an improved effort in G2.