Summoning the power of AquaJoe

Share All sharing options for: Summoning the power of AquaJoe 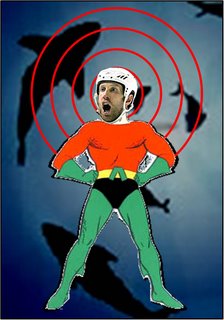 Sleek, now that the Sharks sit at the same point the Ducks did after two games with the Stars, how did you cope with the disappointment?

Seriously, though, I don't know myself what to make of these Sharks; I'm as stunned as anybody that the same things that plagued the Ducks (inability to kill power plays or crappy play when trailing) seem to have afflicted the Sharks too. San Jose has definitely played better than Anaheim through two (they've led in each game), but that's hollow -- at the end of two they're still in the same hole.

Now the Ducks did take game three by scoring on four of their first eight shots, but that seems like an unrepeatable feat, especially against a Stars squad that will be determined not to make the same mistakes again. Still, if the Sharks want to advance they'll need to win four of five, and that means it's time for Jumbo Joe to summon his Aquaman powers and wordlessly command these Sharks.

Or something like that. He'll need to outshine the trio of Stars centers (Ribiero, Modano, and Richards), and force the Stars to refocus their game on his shifts. If he can do that, then I think the rest of the Sharks forwards benefit and this can become a series again. Here's the simple key: offense. The Ducks managed two wins by putting four pucks past Turco; when the number is two or less goals-against and the Stars have won six times.

One way or another, we'll probably be talking about Joe Thornton tomorrow. If it's in a glowing light, then maybe the Sharks have a chance. If not, well, the unfortunate "choker" labeling will continue, and die-hard Shark fans will have a fairly sleepless summer.