Vendetta 2: Rating Revenge in the West

Share All sharing options for: Vendetta 2: Rating Revenge in the West


You have to be impressed with the Ducks' position here, especially considering the franchise lost 11 of its first 15 playoff games. Still, in amassing such a franchise record (the bulk of which has happened since 2003), a lot of toes get stepped on along the way.

Last year around this time, I put a post together called "V for Vendetta—Who’s the hungriest for roast Duck this spring?", where I looked at four western conference playoff participants that had particularly vengeful incentive to eliminate the Ducks. Of those four, Minnesota and Detroit both got that sweet opportunity to eliminate Anaheim but failed, making them probably even more motivated this time around. 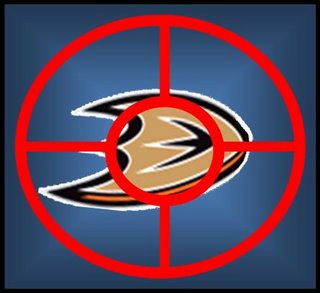 This year I’m just going to include all the possible WC opponents in this discussion, and try to rank their appetite to topple the postseason Ducks (aside from the usual incentive in dethroning the champs), with the main focus being on playoffs past. Some have stronger cases for revenge than others, but of all the choices, who has been hurt most by the Ducks in the past? Here's my ranking:

Poor, poor Wild. Twice in their franchise history they have made the playoffs; twice they have been eliminated by the Ducks. In 2003, they ran into J.S. Giguere at the crescendo of his Conn Smythe glory, who held the scrappy Wild to one goal over a four-game sweep. Unheard of. It took the Wild four years to recover and qualify again, only to go up against the hated Ducks a second time. This time, Giguere sat out (family issues), and backup Ilya Bryzgalov took over. The series was tight, but Anaheim won the first three games each by a single goal, and by then things were pretty much settled. Add in a suckerpunch by Brad May, and another Giguere win, and I think the Wild probably would enjoy a Duck execution more than anybody.

From the archives: Now I'm going to hell for sure, Remembering history so I'm not doomed to repeat it

Of all the western teams in this year's playoffs, only Detroit has had the previous pleasure of eliminating Anaheim, though those series wins (both sweeps) came in the late 90s. The tables have turned, however, since Giguere singlehandedly swept the defending champions in the opening round of 2003, a harsh blow to a proud franchise. Last spring the Wings had a different sort of heartbreak; they led G5 in a tied series 1-0 leading into the final minute of regulation, and Scott Niedermayer's fluky goal and Teemu Selanne's fluky OT breakaway proved the difference. I think the Wild edge the Wings on this ranking because they have no other postseason successes to dwell upon, but the Wings are damn close. Anaheim likely cost them two Stanley Cups.

From the Archives: Off for the weekend, Obligatory gloat post, A history lesson

Calgary was a story of a Flames opportunity lost, but also of a Ducks team coming together in front of a crazy Russian netminder. Calgary had built a 3-2 series lead largely on the suddenly human goaltending of J.S. Giguere, and midway through G5 Carlyle threw in Bryzgalov. Between that and rookie Frenchie Beauchemin pummeling posterchild Jarome Iginla, the Ducks got what they needed to squeak a G6 win before silencing the Red Mile in a dominant G7. I had trouble ranking 3-5 on this list, but I think that stunned silence puts Calgary on top of the only-eliminated-once group.

This series was a mini-Minny sweep; the Avs were dominated by the charging Ducks from the drop of the first puck, even playing without J.S. Giguere and rookie Corey Perry. Really, the momentum built up at the end of the Calgary series carried into G1 and G2 shutout victories, and Colorado was reeling after that. Their best effort came in G3, but Joffrey Lupul had his night of nights, scoring four goals including the OT winner. This marked the first time since the Avs had moved to Colorado that they had failed to take at least two games in a series.

From the Archives: Fun facts about sweeping the Avs

I can't believe it's been five years since the last series that featured two Pacific Division teams, but it's likely this could be revisited in the first round this spring. Dallas was the top seed in the west that spring, and seemed quite determined to not suffer the same fate as Detroit. Their issue was that they were vulnerable to late-game heroics. In all six games of the series, the Stars were tied or had the lead with 2 minutes to go in regulation, yet still managed to lose four of them. All four Anaheim winning goals came on their last shot on net.

From the Archives: A look back at the '03 playoffs

Vancouver might not have the heartbreaking story of contenders 1-5, but it's compelling nonetheless. The Canucks were riding their young goaltender in his first playoff year similar to how the Ducks had done in 2003, and found themselves down 2-1 in the series. They managed to score the first two goals in G4 in Vancouver, seemingly ready to even the series, but then managed to lose that lead. It was a crushing ending for the Canucks, as the series-winning OT goal occurred when Roberto Luongo got more interested in refereeing than netminding, and I'm sure Vancouver would like another chance to eliminate the Ducks and their Stompy Captain.

From the Archives: Welcome to SoCal, Roberto, Marine biologists discover a new disease

It's amazing; Sharks fans might think they're gunning for us, but they're one of the few teams that can only base their hatred on regular season matchups. Well, I guess there's two things playoff-related that they can hate the Ducks for: (1) Pronger eliminated the Sharks in the 2nd round of '06, and (2) Two years in a row, SJ blew a 2nd round series lead and failed to get a matchup against Anaheim. This second one may be a source for Shark-anger; while other teams failed against the Ducks, San Jose blew it before even getting to that matchup.

I don't know why Nashville would hate the Ducks, unless they naturally associate the Ducks with their postseason nemesis, the Sharks, because of geography. If anything, Preds fans might enjoy the fact that the Ducks twice eliminated the Red Wings, but I'm just guessing.

Honorable mentions:
These teams won't be making an appearance in the western playoffs, but you bet they'd like to kill the Ducks as well.

Edmonton Oilers: The Oilers are the only team in the west to have a perfect series record against Anaheim, and yet their hatred is palpable, mostly having to do with off-ice confrontations (the Pronger trade and the Penner signing, and all the Burke-Lowe name-calling that ensued). The Oilers won't qualify this year, but they'll be solidly rooting for a Duck elimination this spring, and not just to protect their postseason winning percentage; they've also got a draft pick that depends on how Anaheim finishes.

Ottawa Senators: This seems pretty obvious to me. The Senators were thoroughly steamrolled in front of a multinational audience in last spring's cup finals, and would desperately like a do-over. It was a tough fall from glory for a team that had easily waltzed through the eastern playoffs, and even attending this year's regular season matchup, you could see the pent-up frustration.

Los Angeles Kings: When Anaheim lifted the cup, a part of every Kings fan's soul died. It has to be tough: 40 years of cup frustration, only to see the new BoC sibling make it look so darn easy, while the Kings sit around the NHL cellar. The Ducks and Kings have never qualified for the postseason in the same year, so it's tough to know where L.A. ranks on this list, but I think it's fair to say that they'd love a shot at eliminating Anaheim, probably more than teams that have faced the Ducks and lost. Irrelevance has its emotional cost as well.

So there you have it. It's a long list of teams with a lot of good recent-history reasons to want revenge on Anaheim, and my attempt to rank their previous playoff nightmares. What do you think? Is it worse to blow a series lead or to get swept? Who's had it the worst?

More likely than not, some team from the west is going to get the satisfaction of dethroning the Ducks; which opponent wants it the most? Let's hear your rankings in the comments.