I've been meaning to put together a stats table to show all the potential western conference playoff participants, similar to the tables I built last year, and here it is. This table shows regulation records (the record at the end of 60 minutes) for the top ten teams in the west playing against the top ten teams in the west, all carrying some level of playoff aspiration. I've turned that regulation record into a winning percentage, and included GF and GA stats as well (note: GF and GA do include OT goals, mostly because I'm lazy). Basically, you can pick a team along the left column and follow it across to see how that team has fared against each of the nine potential future opponents, to see where a particular match-up seems favorable or not. 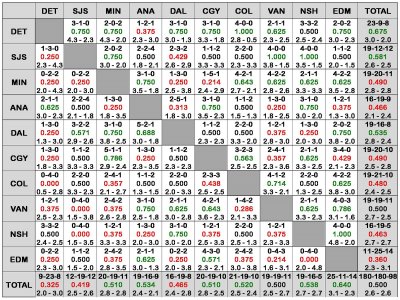 Anyway, I know that today's supposed to be all pranks and merriment, but I thought I'd throw out a statistical glance at the coming postseason. Read into it what you will (and I'll take any responses in the comments), but I think it offers a quick glance at what opponents each team finds more or less desirable for the prolonged fight to the cup finals. Once the standings gets a little more locked in, I'll delve a bit more into the emotional side; I'm quite new at this "defending" gig, and in that sense, it's a playoff year like I've never experienced before.

Until then, Go Ducks.