The Dallas Stars star in: Vertigoal

Share All sharing options for: The Dallas Stars star in: Vertigoal 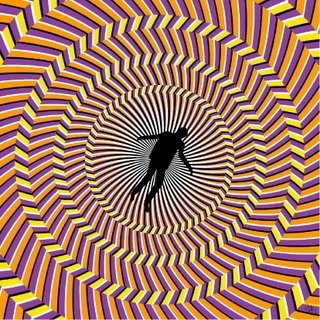 What the Dallas Stars saw in place of Chris Osgood

When you're down 2-0 it can be hard to look on the bright side, but the Stars had to take a little something from tonight's closely played game. Marty Turco was both feisty and fantastic, as he's doing what he has to: punish the Red Wings for crashing his crease so that he doesn't get interfered with on a backbreaking powerplay goal.

I was unable to do a pre-game post, but I'm kind of glad because it would have been soaked in too-soon panic. But it's funny that my plan was to try to evoke the ghost of Battlin' Billy Smith. Low and behold, Smith's name was brought up as Turco was going semi-ballistic on Holmstrom and others. (Whichever Red Wing embellished in the second period Turco trip should get the gold medal for diving. He seriously looked like he got shot out of a frickin' cannon.) 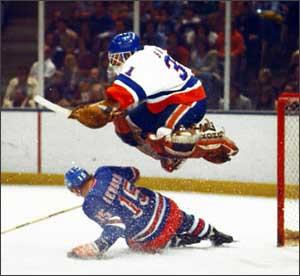 Being down 2-0 is pretty terrible, but the Stars should keep the NBA playoffs in mind and remember that they can turn this series around with some clutch home wins. They now know that they can skate with the Wings, so they need to get it done (and for the love of God, get it on the net).

After an entertaining but still heartbreaking game 2 loss, it's time to play a little game of Good News/Bad News.

The Red Wings powerplay scored another goal, making it four on the series. And their other powerplays looked pretty scary. Basically, when the puck goes to Nicklas Lidstrom, every Stars fan's sphincter gets uncomfortably tight.

Mike Ribeiro was fantastic in this game. He was able to stickhandle past Red Wings defenders all. game. long.

On McRib's two breakaways, Osgood closed the 5 hole faster than a cocktease and made it look easy. And Ribeiro might get suspended on top of all that.

The Stars were able to create plenty of scoring chances in the beginning of the game.

When the Red Wings decided to shut the game down, the Stars were basically buried in the third period.

2-0 is always hard to come back from, but I don't think the Stars are completely dead just yet.

It was so obvious the Red Wings were going to win this game, the writing of this post began in the middle of the third period.

And I never doubted it. So that can't be good. My pre-series prediction was busted purchasing smack by an undercover cop shortly after the game.

Not sure if this will make anyone feel any better, but maybe you can distract yourself with this Vertigo-inspired music video by my favorite band from the state of California, Faith No More.