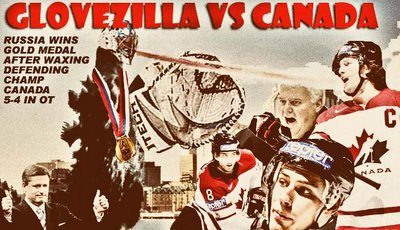 Glovezilla Evgeni Nabokov made 25 saves, Ilya Kovalchuck and Alexander Semin scored two goals apiece as Russia earned a gold medal in the 2008 World Championships with a 5-4 overtime win over the favored Team Canada. The defending champion Canadian squad wilted under sustained offensive pressure from the Capital Offense line of Ovechkin-Semenov-Federov, and Kovalchuck scored a power play goal 2:42 into extra time to ice the gold medal.

The Russian fans in attendance went beserker as Kovalchuck performed glass pullups after scoring the game tying goal late in the third period, and they did a few repetitions of their own after his game winner in overtime.

"You can never make a sick glove save on a shot not taken" - Aristotle.

[Update] Evgeni Nabokov made an acrobatic stop on Mikko Koivu's point blank shot in the semifinals, video from WCSN.