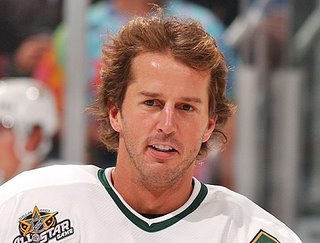 Mike Modano's future figures to be one of the big stories of the off-season.


Well, that was decisive. The Red Wings left no doubt about which team deserved to make it to the Stanley Cup Finals tonight, with a brutal 4-1 win over the Stars. If I had to point to one person in this series, it has to be Henrik Zetterberg.

With all the publicity Ovechkin and Crosby get, Zetterberg tends to slip under the radar for casual NHL fans. But he's absolutely one of the best forwards in the NHL. Plus he looks a lot like Jared Leto.

A hearty tip of the cap goes to Stars fans, many of whom sat through what must have been a tough game to watch in order to bid the Stars a fitting adieu. Dallas fans get a lot of guff for being front runners (sometimes deservedly so, although you could say that about any fans, really). And hockey in Dallas is often treated as a joke.

But tonight Stars fans showed a lot of character by sticking around to give Morrow & Co. a salute. Sometimes, fans match the team. Both showed plenty of heart this year.

Sure, it must hurt to get this far and not go all the way, especially for older guys like Modano and Zubov. And Marty Turco plays with the daring of a young man, but he's a lot older than he seems.

But it's hard not to be positive about this team's future. Ribeiro and Morrow developed into one of the best lines in the Western Conference. Stephane Robidas scored the last goal of the Stars season and raised his game substantially. The team's young defense looks like it will ease the inevitable loss of Zubov. And maybe most importantly, from an annoying storline standpoint, Turco shook a ton of supposed monkeys off his back.

Morrow proved the worthiness of his captaincy with Thor-like power.

There's plenty of questions going into the 2008-2009 season. Will Modano retire? Can Ribeiro stay focused and remain in the second or third tier of scoring forwards? Is Phillipe Boucher still alive? And can the Stars manage to sign a finisher for Mr. $5 dollar shake, Brad Richards?

I'll be around to offer puns and observations along the way. Who knows, maybe next season I'll be butchering the English language as part of The Battle of the Pacific? We'll see.

Also, I threw my name in the hat at the Live Blog at the FanHouse today. That Liveblog thing is the cat's pajamas, really. (Sure, I mostly talked about Ray Emery eating bugs and hockey video games, but give me a break the game was over by the 1st period!)

So, this isn't really goodbye. Just see you later...