A little dirty (but the Stars'll take it)

Share All sharing options for: A little dirty (but the Stars'll take it) 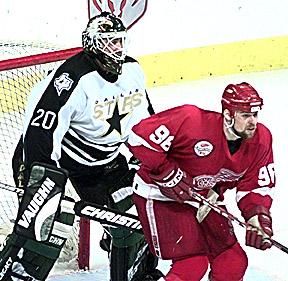 Some things never change. Do you think he has special goalie slash pads or something?


I'd like to preface this carefully: this has been a really, really good playoff year. Aside from Earl Sleek, Emilio Estevez, Chris Pronger's wife and Brian Burke, I think most folks would probably say that this year's playoffs have been way more entertaining than last year's.

That being said, there's been just some outright atrocious decisions made by NHL management/officiating/whatever. It honestly feels at times like hockey is such an outstanding product that it overcomes the idiocy that surrounds it.

Holmstrom got away with goalie interference in Game 1 and therefore Detroit was improperly stripped of a goal that might have lowered the broom on the Stars in tonight's game. Is it "fair"? I guess, maybe. It might not take away the Stars win or the slight momentum it developed, but it's got to worry you about their chances in Game 5. Either way, the league's pin-the-tale-on-the-donkey approach to allowing or disallowing goals is getting downright old.

It's going to take me a while to get over that one. Seriously, could the universe have picked a better coach to be a victim of such a ridiculous call than Angry John Totorella? Maybe Pat Quinn, but that would only be better because his cheeks would probably become rosy with anger. You owe it to yourself, as a hockey fan, to watch the clip under the "Unbelievable" link. (The Finnish goal scorer's reaction is particularly hilarious)

It's interesting how quickly the Stars are assuming the exact same stance that the Sharks did (although the Sharks had the extra carrot of a Home Game 7). The Stars have a lot of heart, but I do wonder if they'll simply get destroyed in the next game.

It'd be nice if tonight's win was more than a moral victory, but it's hard to imagine.

Then again, it has been 33 years since the last reverse sweep...

*I swear, I've almost misspelled Sean Avery by calling him Steve Avery at least 10 times this postseason. I guess if the confusion caused the former NY Mets pitcher to get Elisha Cuthbert in the sack he wouldn't complain, but otherwise the association would probably bother him...