A moment of silence, please

Share All sharing options for: A moment of silence, please 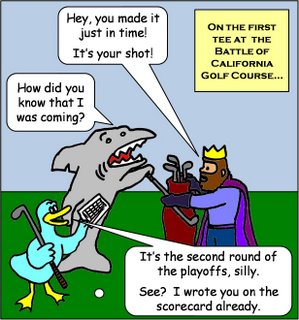 Well, while the Stars and Red Wings resume playing hockey tonight (see below for O'Brien's preview), the rest of us have some time to reflect on other things than "Please oh please don't lose tonight!"

Greg Wyshynski, now of Yahoo! Infamy (apparently now he's known as "Puck Daddy"), has put together a "Eulogy" feature to help remember teams that have been eliminated from playoff contention. Instead of having guest bloggers lament their own team's disappointing playoff exit, he instead has solicited rival-team bloggers to help celebrate the passing of the deceased teams. I think it makes for a better read: why focus on the pessimism of playoff elimination when in other corners of the hockey world rival fans are cheering?

So in that light I was selected to help commemorate the passing of the 2007-08 San Jose Sharks. When Greg contacted me before the postseason started, I didn’t realize it would be such a workload: I had to be prepared for a possible Sharks elimination in Game Seven of the first round, and then Games Four, Five, and Six of the second round, and even then the Sharks pushed their demise until quadruple overtime.

So, without further ado, I point you to Eulogy: Remembering the 2007-08 San Jose Sharks, penned by yours truly. Mainly, it’s a silly look at some of the ways that the Sharks tried to copycat tactics from the Ducks’ cup win from last year, and how even those changes couldn’t get the Sharks out of their annual second-round demise. Also, I take a brief look at some of the salary struggles the Sharks will have this coming offseason: how much more will this same Sharks team cost next year? Feel free to discuss in the comments.

But hey, Wyshynski's not all about Shark-bashing at Yahoo!; he's equal-opportunity. For embittered Shark fans (or other Duck-haters), why not enter Greg's caption contest to assign a Stompy-bashing label to Chris Pronger's Hockey-Reference.com player page? I predict that a Red Wing fan wins this, though; it's going to be tough to match the bitterness of a loud-and-proud fanbase that Pronger eliminated two years in a row.