There's an article in today's OC Register (way to go, Earl) comparing the NHL playoffs and the NBA playoffs. While I could do without all the "NBA players are selfish, NHL players are great" (it comes across as vaguely racist to me), he does bring up a good point about how much more intense the NHL playoffs are than the NBA. You'll see more physical play after one whistle in hockey than you'll see in an entire NBA game. I don't know, I think I like that feeling that at any moment, someone might get punched in the face. There's that line that other sports don't cross that makes them less appealing to me. I'm a barbarian, I guess. 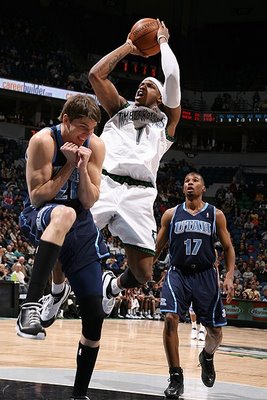 This also reminded me about a soccer match I was watching the other day. Two guys were going for the ball in the corner and one kind of shoved the other to the ground. The guy who got shoved bolted up and got in the other guy's face. There was no one else around, though, so they both kind of looked around after a while as if to say, "Hey, someone break us up." Finally the ref made it over and pulled them apart while they were still jawing. I'm sorry, but I can't respect a sport where guys aren't giving it every last thing they got.

Mike's article earlier is another point: guys don't sit out NHL playoff games because they're in pain. The judgment call isn't if it hurts, it's if they can't physically play. For example, a broken foot? You play because you can still do everything you need to do physically. Basically, the only things you're going to miss games for is if your head or your knees are fucked up. Anything else? You man up and lace up your skates. In contrast, Kobe has been lauded as a warrior because he is playing through an injury to his pinkie. That wouldn't be brought up in hockey because you're expected to play through something like that. That's why hockey is awesome.