Putting the Q in LA

Share All sharing options for: Putting the Q in LA 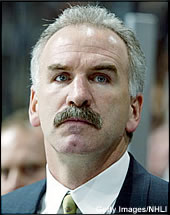 Now, the Kings aren't anywhere near the glamor (glamour if you're Canadian) job so if he had to choose I'm sure he'd go for the Leafs. But if there's any hesitation from that bizarre conglomeration of cooks in the kitchen, I say the Kings ditch Crawford (or did they already?) and pick up Joe Q. Why?

1. He's a coach who excels at getting the most out of flawed teams, which the Kings most certainly are (especially in net).

2. He's experienced in the Western Conference.

3. Spelling his last name is an arduous task.

4. He would bring the stylish mustache back to the Pacific Division.

Wow, did the Stars get a beating on Thursday night or what? I'll try to squeeze in some suggestions/Hail Marys and maybe even a good luck charm or two tomorrow.

But my prediction's already looking wobbly to say the least.