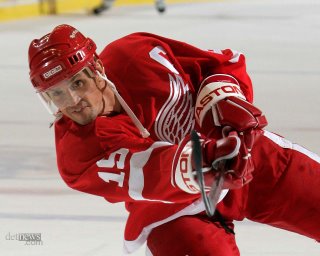 Expect a more thorough breakdown of the D and O groups for both teams on Wednesday. For today I thought I'd just take a free-form approach to some of the more interesting subplots of a rivalry renewed.

1. How good are Ribeiro and Morrow, really?

The resounding rise of Ribeiro and Morrow is one of the most interesting stories of this year's postseason alongside Not Ready for Primetime Price, Malkin sort of upstaging Crosby and the unexpected explosion of Johan Franzen.

McRib silenced, or at least befuddled, many of his critics who remember him only for his shameful MENSA moment years ago in that surprisingly memorable series against Joe Thornton's Boston Bruins. After gathering a nice amount of momentum last season, Ribeiro put up a career-best season with 83 points in 76 games (not to mention a fantastic plus-21). He was so good, in fact, that he tied Marian Gaborik for 5th place in scoring among Western Conference forwards.

Naturally, the question was whether or not he could keep that going when the ice became clogged like Ken Hitchcock's post-cheese steak arteries. All but his greatest admirers doubted that he could maintain his level of play being that his previous playoff high in points was a measly 3.

To his credit, Ribeiro maintained his fantastic chemistry with Brenden Morrow. He is now tied for second place in playoff scoring with the likes of Sidney Crosby and Evgeni Malkin! Ribeiro is flourishing thanks to the scoring depth provided by Brad Richards and the space Morrow creates with his gutsy style of play.

Ribeiro's playoff year reminds me of the year Eric Staal had during the Hurricanes' unlikely Stanley Cup run. Naturally, Staal didn't have quite the same baggage that Ribeiro does, but both players produced well beyond even the most optimistic projections. And like Staal, Ribeiro is doing even better when every goal and assist matters the most. But yet, if Ribeiro's team wins the Cup, he'll most likely be an honorable mention for the Smythe... 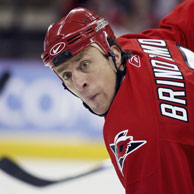 ...because of the balls-to-the-wall, all over the ice play of their hearty Canadian captain. In this case, Morrow takes the place of Rod Brind'amour. With Ribeiro and Morrow clicking together at such a high level, Morrow produced the best year of his career, hitting a new high in points (74) while limiting his penalty minutes to an ideal-for-power-forward number of 105.

Statistically, the Morrow-Ribeiro line ranks as one of the best in the NHL at this moment in time but you never hear them spoken about in the hushed tones reserved for superstars. So, really, where on the NHL totem pole do they rank?

If they can keep producing against the likes of Nicklas Lidstrom and that fragile but talented Kronwall kid, then I think it would be about time that hockey pundits give sizzle (Ribeiro) and steak (Morrow) their hard-earned dap.

You'll rarely, if ever, hear hockey fanatics (outside of Dallas) refer to Modano as a hockey icon. But Modano is to the Stars what Mario Lemieux was to the Penguins and Steve Yzerman was to the Detroit Red Wings. My guess is that most people are jealous of his almost incomparably awesome life.

Still, if you need a reason to feel like life's not always been on a gravy road with biscuit wheels for Modano, I submit this bit of circumstantial evidence. Edit: After seeing the comments, I'd like to express to you the importance in watching the entire clip. Especially if you hate Mike Modano (thanks Anonymous poster)...

Mikey Mo certainly has taken his fair share of licks, as many Dallas fans/Calgary farmboys would say. I actually think the Yzerman-Modano parallel is quite apt, and not just because it will probably enrage zany, octopus chucking Wingheads.

Both guys are synonymous with their franchises. To this day, if you asked a random Dallas resident on the street what they think about when they hear Dallas Stars, most of them would probably say "Mike Modano." When you're with a team for as long as he has been (seriously, he was a Minnesota North Star...) you're going to have some lowlights to go along with the highlights, and it's been well publicized that Modano wasn't too pleased when they gave the C to Morrow.

Still, you'd be batshit crazy to criticize Modano if you're a Stars fan. Much like Yzerman, Modano eventually agreed to sacrifice offensive numbers and played a solid two-way game to lead his club to a hard fought Stanley Cup.

And much like Stevie Y, it's disgusting to imagine Modano in another uniform (which almost happened with Boston).

He still is one of the best skaters on one of the best skating teams in the NHL, which is an accomplishment in itself. Modano still shows his offensive prowess every now and then, but his main duty is harassing the Joe Thorntons of the world and he's done a more than admirable job.

If you're picking the greatest American hockey player of all time, is it Chris Chelios, Mike Richter, Jeremy Roenick, Brendan Shanahan or even Joe Mullen? Or could it be that the greatest talent ever developed by the old U-S-of-A might be the very guy who owns the all-time points record for a red, white and bluer? He at least needs to be on the USA Hockey Mount Rushmore (although some would probably argue that it would just feature Herb Brooks, Mike Eruzione and their big-screen dopplegangers)

3. Can Turco get yet another monkey off of his back?

4. Is this Johan Franzen character for real?

Before the days of the salary cap, the Red Wings were either the New York Yankees or Los Angeles Lakers of the NHL, depending on which teams you grew up hating the most. Along with the Avalanche and a handful of other teams, they'd always poach the Ray Bourques during the trade deadline and were the easy Goliath to root against.

Now that the Red Wings must play fair and stay under the cap, it's harder to hate them (though by no means impossible). But there's one element that still links them with the Yankees. There's a well worn cliche that players who were once lost causes somehow find a second life when they put on the pinstripes.

The beautiful "Original Six" jersey of the Red Wings often has the effect on players, as guys seem to come out of nowhere when they put on a jersey that seems equal parts elegant, Freudian and Russian.

While Franzen isn't a perfect example of that, he definitely seems to add another layer of validity to the hockey factory feel of the Red Wings. They always seem to find gems late in the draft - whether it's Henrik Zetterberg or Nicklas Lidstrom. Since the Red Wings series lacked substantial drama (although there was a brief bit of intrigue against the Predators), I haven't been able to catch the Wings that much in this year's playoffs. Still from what I've heard Franzen's hot streak started quite a while before the playoffs started, so he might simply be on fire.

This is bad news for the Stars, who will have their hands full with two absolute superstars in Zetterberg and Pavel Datsyuk.

5. Henrik Zetterberg looks like Jared Leto. And so does Ryan Miller 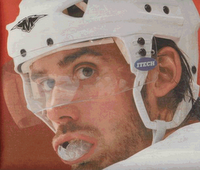 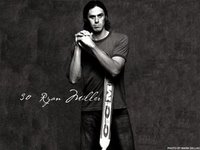 That picture of Jared Leto (middle) was the worst I could find of the "Fight Club" actor/semi-decent lead singer of 30 Seconds to Mars (searching for Danica Patrick and Willa Ford > Jared Leto). Well, uh...make that the...uh...almost worst photo I could find.