Share All sharing options for: Rut Roh (The Director's Cut) 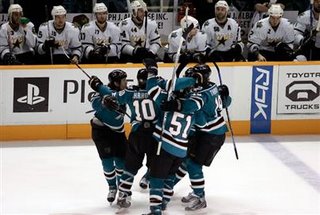 The Stars just caught Lady Luck in bed with a mysterious gentleman wearing Teal. Yes, indeed, the Stars might have the series lead but the Sharks regained their self-belief after coming back from the dreaded "worst lead in hockey."

There's basically two ways to look at Game 6 if you're a Stars fan. Either you're optimistic and think that the next two games are the equivalent of two coin flips: there's a good chance you'll get at least one of them to land your way. And then there's the Chicken Little side, the one that says the Stars are screwed if they have to win a Game 7 in Computer Arena after losing all the momentum.

Either way, the Sharks have nothing to lose (not true) while the Stars are facing that energy-sapping "we better not get reverse swept" feeling and need to win one of the next two to avoid being placed with the 1975 Pittsburgh Penguins and that New York Yankees team on the Mount Rushmore of playoff choke jobs. There's really no good way to spin coughing up a 3-0 lead. Even if you're the underdog.

A lot will be made about the Brendan Morrow goal that was called back (my opinion: "dubious"). But the Stars had the lead at that point and increased that lead soon afterward, so to blame the loss on a non-goal that honestly should have been rendered irrelevant is just making excuses. Besides, the Ambassador of Fun scored a certain obvious non-goal to win a certain Stanley Cup, so Stars fans might want to save their tissues for another day. 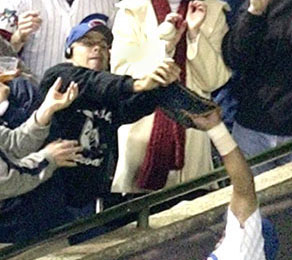 The funny thing about the Bill Buckner error and the Bartman fiasco is that both scapegoat moments happened on a Game 6. In other words, their teams still had a chance to seal the deal.

The Stars have no excuse if they lose four games in a row. Choker, soft, whatever label you choose might not be fair but that's life.

Avoiding that ugly fate would be slightly easier if they got Stu Barnes back, though.