[EARL EDIT: As you may know, Rudy is off traveling the world, but he has left some Kings post for me to post to help us pass the time. I'm still on my blog break until the cup finals are over, but I'll note that my distractions are coming to a close: I've passed all the story missions in GTA4 and am ready to start Season Three in Battlestar Galactica. In the meantime, here's a PuckToon to prove that I'm still alive and watching hockey. Anyway, here's Rudy...]

Last Season: In terms of overall achievements, Dustin Brown probably had the best year of any player in the NHL not named Alexander Ovechkin. Coming into the year, much was expected of Brown. He had played on L.A.’s top line the previous season and had shown a sign of progress. Still, much of his success could be attributed to the stunning debut of Anze Kopitar and not Brown himself. At the end of that season, however, Kopitar had gotten hurt and Brown had responded by actually improving his play, tallying 11 points in 11 games. Brown continued to progress his play this season, setting a career high in points and leading the league in hits. It wasn’t so much the raw totals that impressed me, though; it was the way he got them. 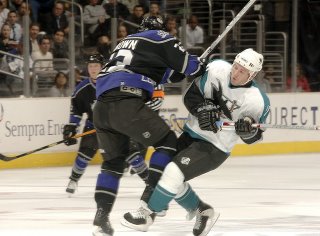 Brown has always been known as an impressive and devastating hitter. My favorite memory of Dustin thus far has been a game he had against Anaheim. Chris Pronger had the puck and came out of the corner where he was met by Brown, who promptly knocked him flat. Pronger hacked him in the leg (at least he didn’t step on him) and said some unkind words. A few shifts later, Pronger had the puck along the boards and Brown knocked him off the puck, took it into the slot and scored a goal. Brown is a quiet guy* but he definitely has a little bit of asshole in him that helps make him a better player. 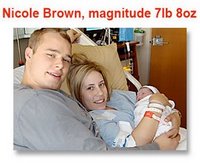 Courtesy of the Institute of Skate Tectonics

*Brown’s wife talked way more than he did on his In My Own Words special. Also, she was kind of a nag to him. You'd think a woman named Nicole Brown would show a little more deference to her L.A-based, professional athlete husband.

This season, though, Brown was able to focus his hitting a little better. The big difference this season is that he didn’t try to make a hit to affect the play; he tried to affect the play by making a hit. It seems like semantics, but there is a difference. Brown didn’t go out of his way to make a hit, but instead made the hit that was available to him. He didn’t have as many giant hits as you’d expect, but he had hits that affected games. That made him a much, much more effective player than he was the previous year.

Another difference in Brown’s game was that he became a much better diver. I’m not talking about the kind of diving that Corey Perry does, where you flop where there is no call. I’m talking about the type of flopping that Shaq does, where he flops because otherwise a penalty would go unnoticed. Brown is so strong* and so balanced that opposing players would be able to hook and hold him with impunity. According to On the Forecheck, Brown ended up drawing 65 penalties this season, tops in the league and directly in front of Crosby, Ovechkin and Datsyuk. His penalty plus/minus was also tops in the league. Of course, Crosby didn't play the whole season, but he's also a whiny bitch so fuck 'im. The ability draw penalties is a very important and underrated part of the game, and it's a part of the game Brown excels at.

So, to recap: Brown led the set career-highs in goals and points, led the league in hits and penalties drawn, signed a 6-year, team-friendly deal, and had his first child. He’ll probably become the captain of this team in a few years and was a major contributor on a young and improving U.S. National team. Nice year.

*Kevin & Bean would classify him as "retard strong." He should hang out with Eli Manning.


Next Year: Brown will turn 24 next year and continue his development. He’s managed to find a nice balance between getting to the front of the net and creating space for Kopitar and also creating his own play when Kopitar is tied up. What would I like to see Brown work on for next year? I’d like to see him become more of a force in front on the power play. This is just anecdotal evidence, but it seemed to me that the Kings had far fewer tipped goals than other teams we played. If Brown can become a power forward who can also get those garbage goals in front, he’d really open our power play and give Kopitar and Visnovsky more space to create opportunities. Other than that, he just needs to keep getting better. In a season full of negatives, Brown was definitely a positive.