Share All sharing options for: Speaking of Playoff Overtime... 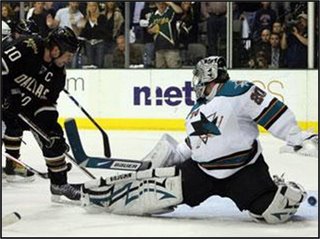 Well wasn't that something last night? The seventh overtime period of the six-game series, grittily played from opening whistle until Brendan Morrow's final tally early on a Cinco morning. I got the following e-mail sent to me 10 days ago, but between my 'week off' and the zaniness of the Sharks-Stars series I've been waiting to post it, but I guess now it's as appropriate as it's ever going to be:

My name is Jonathan Harris and I work at a human-powered search service called Mahalo.com.

I've been a big fan of The Battle of California for a few seasons now and appreciate the pro-Ducks coverage I can get there (I'm a die-hard Anaheim fan myself, and am still reeling from high expectations and disappointment.)

At any rate, one of my associates at Mahalo has recently completed a page celebrating the Best Hockey OT Winners in NHL history. We think this is a great page with original content and commentary and we're trying to get it featured on as many hockey/sports related blogs as we can. I thought you might like to see it, considering your love of the game and penchant for slightly off-beat hockey content off your own (I particularly like your recent cartoon of the Sharks and Flames begging each other to score first).

Take a look at the page when you get a chance. Let us know what we're missing and how we can improve the result!

Nothing gets my attention like a little flattery. So, if you're inclined, take a look at their collection of OT winners and offer your suggestions, either here or on their comments section. The plug e-mail also got me thinking, though, 'What was my favorite OT winner in Anaheim's playoff history?' It's not that easy a question, I think, because it should consider:

a) The prettiness or grittiness of the goal
b) The game up to that point (were goalies unbeatable to that point?)
c) The importance of the game and perhaps what followed
d) The game-winning hero

Based on that criteria, I am leaning towards Steve Rucchin's overtime winner in G4 of the first round of the 2003 playoffs, the goal that completed the sweep of the defending champion Detroit Red Wings. It wasn't the prettiest of goals, but it was the only time I ever saw defenseman Keith Carney carry the puck behind the opponent's net, and Rucchin was as appropriate a hero as Anaheim had on that squad. It was a huge statement goal, one that vanquished the Red Wings curse that had swept Anaheim in both previous playoff appearances, and helped propel the upstart Ducks all the way to the seventh game of the cup finals.

Still, I am open to suggestions on this one, so let me open it up to the comments: For any team, what was your favorite OT winner in your team's playoff history? Who was the hero, and why was it so special?

(Side note: Incidentally, today is the 5-year anniversary of the G6 when Anaheim ousted the Dallas Stars in 2003. I remember the date specifically, because a fan sitting next to me at that game had put together one of the more memorable signs I saw that playoffs: "It's Cinco de Mayo--Time to Sink DiMaio!" Rob DiMaio was just a bit player for Dallas, of course, but I've always been a sucker for stubborn puns.)