Watch Your Back, Raitis

Share All sharing options for: Watch Your Back, Raitis 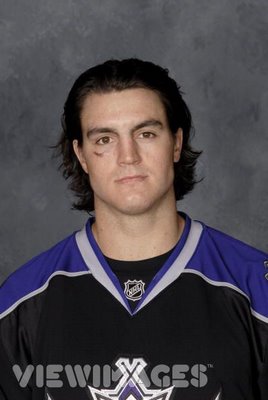 Inside the Kings has 2 awesome posts about Kevin Westgarth, the enforcer for the Manchester Monarchs (AHL). He's a Princeton graduate and has long hair... who does that remind me of? The first link is a couple videos from his fights (I recommend the Boulerice fight), and the second is a pretty enlightening interview on the method behind fighting. It's pretty interesting, even if you're not a Kings fan. Here's an excerpt (bolding mine):

Question: So is hockey fighting a science, a skill or a bit of both? Westgarth: I think it is definitely both. There is definitely a lot of technique to it. In a big way it is almost a mindset. It is just something where you have to overcome that fear of being hit. I'm always honored when a younger guy is going to come up and ask me for advice about it. We had some guys come up this year out of college and they asked me for some pointers, and we'd go through some stuff where you are just holding on and working on balance. But honestly the most important thing that anyone can learn is that it doesn't hurt to get hit. That is the biggest thing to get over, because if you get tapped and you get hit you can't freak out. You just have to get through it.

That is pretty awesome. I doubt Westgarth will make the team next year since we have Ivanans locked up for 2 more years, but one of the two could be used as trade bait. Or maybe the Kings can just say, "Fuck it," next year and put Westgarth and Ivanans around Brian Boyle and try to intimidate their way to victory. Either way, it's nice to know we have someone ready to protect our guys if anything happens to Raitis.