You might not want to walk a mile in those shoes... 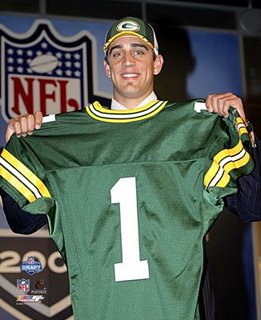 Aaron Rogers: tragically unlucky or a hero to lazy men across the nation?


Every once and a while, I try to imagine what it would be like to be a professional athlete.

It's pretty run of the mill to dream of having the goal scoring ability of Mario Lemieux or being infinitely clutch like Michael Jordan, but a lot of times it goes a little deeper than that for me. Walking a day in the shoes of a hamandegger seems way more interesting.

Imagine what it felt like to be Darryl Sydor, watching helplessly in street clothes for most of the playoffs, but at the same time being very well compensated (if you ignore the fact that, at least literally, players "aren't paid" in the playoffs).

One name that will always stand out is Aaron Rogers of the Green Bay Packers. I can't help but wonder: is this guy cursed or subtly lucky? After sitting in the NFL Draft Day green room for what must have felt like an eternity, Rogers basically became a verb (example: Angelo Esposito got Aaron Rogers-ed in the 2007 Entry Draft, when he fell all the way to the Pittsburgh Penguins). Then, he got the extra bad luck of having Brett Favre stay in the league a year or two longer than expected.

Falling so far in the draft and getting barely a whiff of football outside of the preseason would make you think that some spurned high school cheerleader ex-girlfriend must have placed some kind of voodoo curse on the guy. But then again, the guy is collecting 1st round draft pick money...but instead of getting squashed by 300 lbs. defensive linemen, all he has to do is hold a clipboard.

Anyway, this kind of sidetracked from what I originally planned on writing about:

I wonder what it must feel like to be a crappy athlete. Sure, when a guy makes millions, he basically becomes a public figure and if we couldn't lampoon professional athletes...what would be the point of following sports? 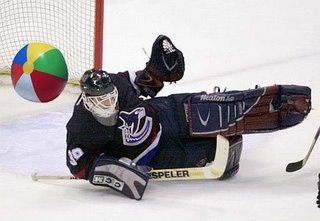 Hey, look on the bright side Dan: some of us also remember you beating the life out of Salo...


Ryan Leaf, Dan Cloutier, Alexander Daigle, Tommy Salo and a litany of other jersey wearing punchlines take a lot of (mostly lighthearted) abuse. But I wonder if these guys just outright avoid sports web sites. Seriously, if I were Leaf I would bug Ted Leonsis to develop a special snarky 1st round draft bust article blocker, so that I could safely surf the Al Gore without stumbling on a site that would make me want to hang myself.

Seriously, if you were Leaf, wouldn't you hate stumbling on things like this from ESPN Page 2:


"Before the introduction of passing windows in the very first "Madden" for the Sega Genesis, playing virtual quarterback was about as intuitive as stepping under center for an actual team while wearing a LEAF #16 jersey. Point-and-pass systems were crude and inaccurate."

It just goes to show you that as much as many of us envy sports athletes, there are times when they wish they would blend in to the crowd. Imagine having your worst moments at work frozen in time on YouTube and constantly cited by TV shows and smartass sports blogs.

And, because I'm a dick