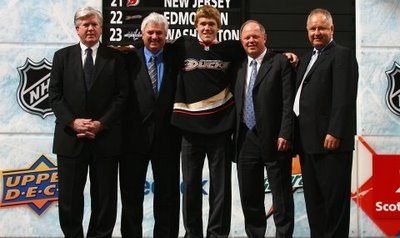 To begin the draft for Anaheim, they made a trade for the 17th and 28th overall picks with Los Angeles after the Kings made a trade with Calgary sending Mike Cammalleri to Calgary for two picks for the Kings.

At 17th overall, the Ducks drafted Jake Gardiner, a defenseman from Minnesota. He played forward for three of his high school seasons and switched to defense during his senior year. Due to the position change Gardiner is a very offensively strong blue liner.

He finished fifth in goals (20) and assists (28) in the Classic Lake Division, leading all other Minnetonka players. His 48 points placed him third overall among Minnesota high school defensemen in scoring. Next season Gardiner will be playing for the University of Wisconsin.

Personally, i never paid any attention to this kid, but he seems to be a good fit for the Ducks. I'm not sure why the Ducks felt the need to get involved with the Kings/Flames deal but whatever. The Ducks got a defenseman which they could use, especially once this kid finishes at the University of Wisconsin. All in all, not a bad draft choice or day for the Ducks

The Ducks finish the day in a deal with Phoenix. The Ducks give up the 28th overall pick for the 35th and 38th. With this deal the Coyotes draft a Russian and the Ducks are done for the day.