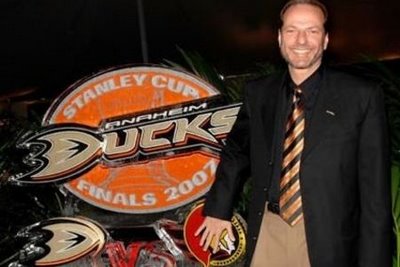 For background information on this story, by this writer click here.

After it was announced by the NHL that Anaheim Ducks owner Henry Samueli had been suspended for recent legal issues, today the organization announced Chief Executive Officer Michael Schulman has been named Club Governor. Henry Samueli’s wife, Susan, a co-owner of the Ducks said she would abide by the terms of her husbands suspension from the NHL.

"I respect the decision made by Commissioner Bettman and will abide by the terms of the suspension," said Henry Samueli. "I’m confident the team will be in great hands in my absence."

"In support of my husband and to avoid any improper appearance, I’ve notified the league of my intention to abide by the terms of Henry’s suspension," said Susan Samueli.

Henry and Susan Samueli purchased the organization in June, 2005. They immediately revamped the team with a new image replacing the old Disney ties with a new more Orange County feel. The new ownership and team changes were the beginning to a fantastic 2007 season which saw the Ducks become the first California-based hockey club to win the Stanley Cup. With the Samueli’s ownership, the club has also created several new charitable initiatives benefiting Orange County, including educational programs, fundraisers and monetary donations.

"Although we will not be involved in decision-making, we will be cheering on our Ducks as loudly as ever." said Susan Samueli.