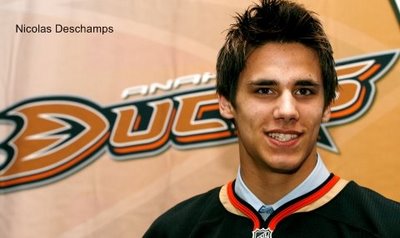 The Ducks saw just as much exciting action take place on day two as day one. The Ducks added six selections in the second and third rounds. With the 35th overall pick the Ducks took Nicolas Deschamps of Chicoutimi of the QMJHL.

Deschamps, a 6-0, 173-pound center had 24 goals and 43 assists in 70 games last year. His 67 points led all league rookies in scoring and he was named to the QMJHL All-Rookie Team. He was ranked as the No. 21 North American Skater by the Central Scouting Service.

"I’m very happy to be going to the Ducks," said Deschamps (pronounced Day-SHAW). "It’s a good organization with good fans. They’re always good and they always compete every year. It’s going to be great to go to camp with those guys."

Just four picks later, at 39th overall, the Ducks drafted center Eric O’Dell from Sudbury of the Ontario Hockey League. The 5-11, 174-pound O’Dell had 14 goals and 18 assists in 28 games for Sudbury last year.

"This is a huge day," O’Dell said. "This is my hometown, so I have a lot of people cheering for me. It’s great. I couldn’t ask for anything better."

With the 43rd overall pick, the Ducks took another future UW Badger, when they drafted Justin Schultz from Westside of the British Columbia Hockey League. The 6-0, 163-pound center had nine goals and 31 assists in 57 games the past year.

At 71st overall with the tenth pick in the third round the Ducks drafted left winger Josh Brittain. At 6-4, 210-pounds Brittain played for Kingston of the Ontario Hockey League and was fourth in team scoring in 2007-08 with 51 points (28-23-51) in 68 games.

With their two more picks in the third round the Ducks at 83rd overall took goalie Marco Cousineau of Baie-Comeau in the QMJHL. Cousineau had a 2.18 goals against average and .903 save percentage in 58 games last season. At 85th, the Ducks drafted Brandon McMillan of Kelowna of the WHL. McMillan had 15 goals and 26 assists in 71 games.

With the team’s only selection in the fourth round, the Ducks drafted defenseman Ryan Hegarty of the U.S. Development Program. Hegarty had seven goals and 12 assists in 47 games for the USA U-18 team.

The Ducks closed the day taking defenseman Stefan Warg in the fifth round. The 6-2, 187-pounder from Stockholm, Sweden played for Vasteras of the Swedish Junior League last season.

As a writer, and a sports fan, this draft went very well for the Ducks. they filled some future gaps in the team, added a ton of talent and look strong heading into the future. With the way the draft went for Los Angeles and Anaheim, Southern California will definitely be a hockey hot bed soon.