Share All sharing options for: Battle of California Boston 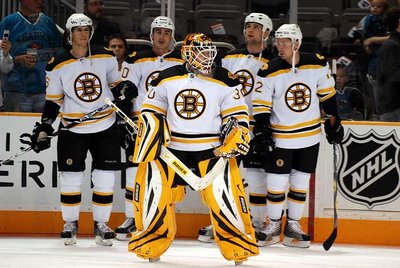 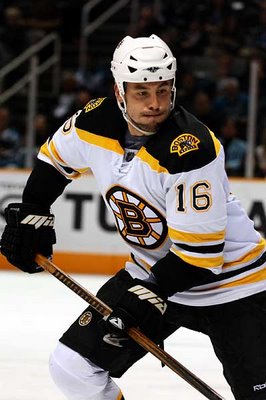 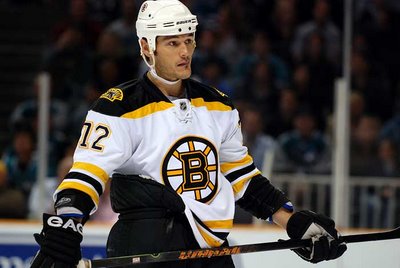 The Boston Bruins entered the 2007-08 season with guarded expectations. Still reeling from the aftermath of the Joe Thornton trade, the B's ended a short playoff drought clinching the last playoff spot in the Eastern Conference with one game left in the regular season. Boston finished with a respectable 41-29-12 record, although they were outscored 212-222 and had only two players reach the 20 goal plateau in Marco Sturm (27) and Chuck Kobasew (22). Tim Thomas was a workhorse in goal again this year, registering a 28-19-6 record with a 2.44GAA, .921SV% and 3 shutouts. The NHL's first American franchise dropped a first round Eastern Conference Quarterfinal series to the Montreal Canadiens in 7 games.

According to the Yahoo Sports end of season team report, solid goaltending by Tim Thomas kept the Bruins in the hunt for much of the season but the team lacked overall offensive depth. Yahoo also notes that defenseman Zdeno Chara is recovering from shoulder surgery, goaltending prospect Tuukka Rask had a heart to heart with general manager Peter Chiarelli about the quality of his starts in the AHL, and the B's formally severed ties with former Ducks fifth overall draft pick Stanislav Chistov.

TSN's Scott Cullen published a Boston Bruins season in review at the end of May. Cullen quoted head coach Claude Julien, who said the team needs to transition from a good team to a better team, and that the team will have to rely heavily on youth again next season. He notes that Bruins leading scorer Marco Sturm finished with his sixth straight 20+ goal season, but that he has not reached the 30 goal plateau yet in his career. Not mentioned, the number of breakaways Marco Sturm created that did not lead to a goal. There was a lot of pressure on Phil Kessel this season, but three goals from the 20 year old in the playoff series against Montreal was a bright spot. The Bruins should expect more next year with a healthy Patrice Bergeron and Chuck Kobasew, but Glen Murray is trending downward in the final year of his 5 year contract according to Cullen.

BostonBruins.com blogger John Bishop detailed several comments by general manager Peter Chiarelli made in a conference call about the re-signing of forward Chuck Kobasew, ongoing discussions with Dennis Wideman, Mark Stuart, and Petteri Nokelainen, and Bishop also published a post on the signing of free agent defenseman Aaron Ward and the ongoing discussions with Glen Metropolit.

The Bruins already have a significant salary commitment for 2008-09 (estimated $47 million payroll with a salary cap that could rise to $56.3 million), but Chiarelli needs to perform shrewd maneuvering at every opportunity to add offense for this team next year. The deep 2008 NHL Entry Draft should provide Boston the opportunity to add a secondary scoring element if they are prepared to make a bold trade, a critical evaluation of available free agents needs to be made, and given the salary constraints and elevated salaries impacting the trade market Boston should have scouted the European and Russian leagues heavily to try to find an unsigned goal scoring diamond in the rough.

Boston holds the 16th overall pick in the June 20–21st 2008 NHL Entry Draft, along with a second round pick (47), third round (77), fourth round (108), fifth round (138), sixth round from Anaheim (174), and seventh round (198) picks. A conditional fifth round draft selection sent to Chicago required Brandon Bochenski to play in more than 80 games subsequent to the trade, which was not met.

The photos above are from the San Jose Sharks home opener against Boston, which the Bruins won 2-1 when defenseman Aaron Ward hammered home the game winning goal with 12 seconds left in the third. The "Power Outage Game" was one of the most bizarre games played in San Jose last year. The building lost complete power near the end of the pre-game skate and did not fully re-gain it until halfway through the first period. There were no national anthems sung prior to the game, and an accident on a key offramp and the downtown San Jose rock and roll festival made just getting to HP Pavilion difficult.