I've been thinking more about that TJ Fast trade, and I still don't understand what the hell happened. Neither team was made better and (most likely) neither Fast nor the 2009 5th-round pick will make the NHL. (I love how he didn't even fetch a 2008 5th-rounder.) These inexplicable little trades happen all the time, and I honestly think they happen for no other reason than GMs need something to do. I like to call these trades "Bochenskis," in honor of the poor former Duck who has seen his career manipulated by bored GMs who simply want to make a move. Look at his career:

Mar. 9, 2006: Traded with a 2nd-round pick to Chicago Blackhawks for Tyler Arnason

Feb. 3, 2007: Traded to Boston Bruins for Kris Versteeg and a conditional pick 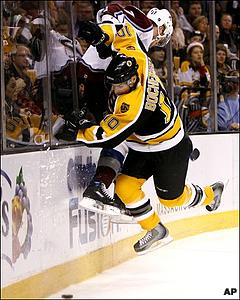 Nice check, now get to Chicago.


That's 4 times in 3 years Bochenski has been traded, each time for absolutely no gain for either team. The poor guy got one opportunity to actually decide where he wanted to play, and he was rewarded for that by getting traded. That sucks. It's not even like Bochenski is a shitty player or anything. He's good enough that GMs will want him but not good enough that GMs won't want to give him up. It's a tough life, but I guess that's the flipside of hockey immortality. Anyway, I don't know the point of all this, but I thought I'd just point out that hockey can suck sometimes. There are guys behind the names on the transactions wires and all they want to do is play hockey. I'm not sure some of these GMs realize that. Good luck in St. Louis, TJ.