Ah, the complicated life of Earl Sleek. I'm a busy guy lately, though it may not be that obvious from the front-end of a blog. This past March, I started a new job that actually requires my daily attention, and because of work hours and commute time I'm daily getting home two hours later than I used to. As such, my blogging time has been cut into, which is why I'm announcing a new tag-team Ducks blogger who will be joining our BoC staff.

Mostly I'm going to let him introduce himself, but Ken Armer contacted me recently about this possibility and I decided that it was worth a shot; there's certainly Ducks stories that need some more attention than I'm giving them. I haven't had the time to post anything about recent M.A. Bergeron trades or Jonas Hiller contracts, and I'm swamped trying to put together a good Niedermayer/Selanne post before their retirement decisions are due next week.

Now I don't know Ken at all (really that's true of me and all our writers), but he has been writing about the Ducks all season at Bleacher Report and at The Puck Drop, which gives him more credibility than I had when I started blogging. Ironically, in the same week where I decided not to change the blog name to accomodate Stars coverage, I hire a 21-year-old kid from Texas to assist in Ducks duties. Go figure. Anyways, Ken tells me he plans to move to SoCal when he's able, and aspires to one day write for the L.A. Times (side note to Ken: BoC may help with exposure, but not with credibility). 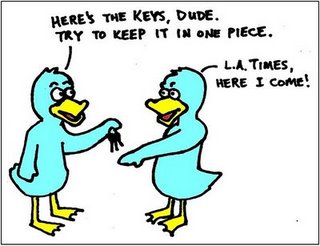 I do want to stress that I'm not going anywhere. I've still got plenty to say about these Ducks, but instead of presenting them in a rushed and sloppy way, I can now take the time to make them well-thought-out and sloppy. Also, I am starting to pack up my Redondo home in preparation for an eventual move down to Orange County where my new job is (I'm house-hunting later today), and when that move gets done my commute will disappear, and I'll be freer and even more local to the team I cover.

So anyways, once all the technical nonsense is worked out, Ken will probably start posting next week, and we'll see how it goes from there. Welcome aboard, Ken.

Sidenote: Sometime next week I am going to do a cleansing out of our blogroll, removing links that haven't been updated in a while. If you're an owner of a lazy blog, you may want to write a post or shoot me a note to let me know your blog's not dead. Also, if ever I'm missing a link, don't hesitate to point it out.