Share All sharing options for: Help me understand the Ducks' cap situation 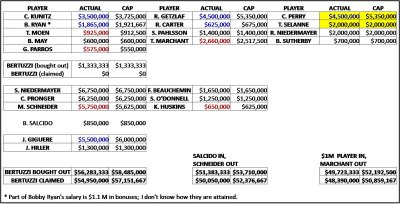 OK, here's the things to know about this chart:

1. I've taken all salary numbers from NHLSCAP.com, except Sutherby's salary comes from the OC Register blog. I have completely made up Perry's salary (I gave him Getzlaf's contract) and Selanne's non-retirement plus salary (I gave him $2M). Those assumptions are shaded in yellow, and certainly worth discussing. I've mostly made them up as placeholders, not as thought-out expectations.

2. I have been very careful to separate actual dollar spending from salary cap calculation, because when Burke talks about spending $50 million, he's talking about money, not averaged salary. In cases where spending is less than cap value, I've colored the dollars-spent in blue font. When spending exceeds cap value, they are colored in red. Contracts over time are generally level or ascending, and blue values usually indicate the start of a new contract.

3. I don't really know the rules about Bertuzzi's waiver status, but I've entered it in as best I know. In fact, the reason I'm posting this is so the BoC readership can correct where I've fucked shit up. I'm too lazy to even find out if buy-outs (like Michael Leighton) are possible in this waiver situation, but that's where informed readership pays off, right? Cleared up thanks to Mike!

4. My totals reflect all the players in boxes (includes Parros and one version of Bertuzzi, but not Salcido). To the right, I also show calculations for Salcido instead of Schneider, and then on top of that to replace Marchant with an anonymous $1-M replacement player. This second step isn't necessarily my recommendation, but Marchant is probably the next option who is getting paid more this year than his salary cap figure. Ironically, his salary is more reasonable this year than any previous year of his contract, considering the context of a fast-increasing salary cap.

5. As I indicate at the bottom of the chart, I've included $1.1M in bonuses for Bobby Ryan, but I have no idea how he does or doesn't earn them. That's one question I'd love to ask Brian Burke; it's probably better if the Anaheim fanbase knew of any constraints around Ryan's playing time.


So anyone who's inclined and knows their cap-math, please take a look at this chart and let me know if I got anything wrong; if you're compelling enough in the comments, I will alter the numbers and this post. I'm hoping to get this cap situation squared up for a follow-up "suggestions" post, but I'd like to get my facts straight first.

For now, I'll say this: keeping Schneider likely presents a salary cap issue, otherwise it's not important. Also, it's probably imperative that Corey Perry get an ascending, Getzlaf-like contract. If the target is to spend $50M this season, then his actual dollar salary needs to be lower than the averaged-amount it will take to sign him.

Anyways, fire away. Let's figure out this goddamn cap math.