Is Brian Burke a Be-Leaf-er?

Share All sharing options for: Is Brian Burke a Be-Leaf-er? 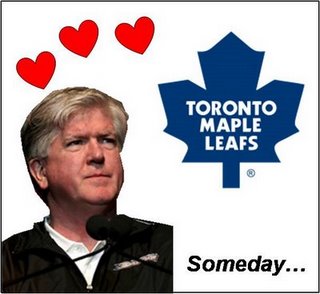 Now I'm not normally a guy who likes to speculate on rumors very much, but I guess Toronto journalists are salivating at the thought of Brian Burke filling the Maple Leafs GM vacancy when he's done in Anaheim. To my understanding, Burke has committed to this season as GM for the Ducks, but hasn't signed to any extension beyond that.

Ken Armer is a solid Ducks blogger that I've just found out about (I added The Puck Drop in the Ducks sidebar, which features a breaking M.A. Bergeron trade!), and at Bleacher Report he gives a solid enough rundown of what's basically a "wait and see" situation. Tom Benjamin is a bit more pessimistic, and suggests that the Ducks should trade Burke's contract to the Leafs if he doesn't sign a long term deal.

I can't speak that well about what Brian Burke wants, nor should I be a credible advisor about what he should want, but even so I haven't really been stressing about these rumours (hint: use a "u" when the rumours come from Canada). If Brian Burke really does covet the Toronto spotlight and spending budget, if he really does bleed Maple Sap, I'll wish the guy well. Burkie has been a pretty awesome GM for the Ducks, and if he seeks bluer pastures, at least he'll have left the team in manageable shape.

Two things I want to express about Brian Burke:

1. He's gotten lucky at times. Obviously Burke does deserve praise for combining the likes of Scott Niedermayer, Chris Pronger, and Teemu Selanne into the nucleus of a cup-winning team, but in saying that there was also an element of luck in acquiring any of them. When Scott became a free agent during the lockout, Burke was fortunate enough to have signing rights to his brother Rob. When Selanne was signing for pennies that same summer, Burke obliged, but couldn't have foreseen the dramatic resurrection of the Finnish Flash. When Pronger forced Kevin Lowe to make a trade, Burke was fortunate enough to have the cap room and the assets to swing a deal while other teams tied their own hands.

While Burkie does get kudos for that trio of moves, I really don't consider them indicative of hockey genius -- really, these types of decisions are almost no-brainers. When an all-star opportunity falls into your lap, there shouldn't be a lot of inner deliberation. Instead: 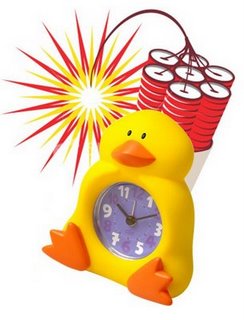 2. Still, Burke's a solid roster planner. Burke's real genius move may turn out to be the ticking time bomb roster he's constructed in Anaheim. He's built a payroll that expires with a bang next summer, sort of a clean slate. Six notable players are signed past next year -- Pronger, Giguere, Getzlaf, Kunitz, Ryan, and Carter. Whenever tagging rules allow I expect Corey Perry to get added to that list also.

As of now, everyone else's contract runs out next summer, including GM Burke, Coach Carlyle, and the occasionally-retiring Niedermayer brothers. This roster timebomb is the result of what I think Burke has done really well as a post-lockout GM: in the face of impending rule changes and a brand new salary cap, Burke refused to commit long-term to an uncertain future. He assembled a championship team with some gutsy trades, and he built in an "out clause" after the fourth year, a good point to reassess and reload the roster.

Sure it would be nice to have certain players tied up longer, but really the key is flexibility. Having seen plenty of new-rules enforcement and salary cap management, Burke or even a replacement GM can assess and reassemble a roster with freedom: plenty of spending money and lots of positions to fill. Burke's smartest strategy may have been restraint, and it's the reason I think if he wants off to Toronto or elsewhere, I won't be panicking. The notion of an unknown replacement GM certainly has its scary side, but at least there is plenty of spending room -- no need to wait for Burke's signings to expire. (Note: this is why I keep calling this offseason "boring" for the Ducks. It's not really a valid label, as there certainly are some meaningful storylines, but next summer is when things will be really interesting for the Ducks, especially if Burke seeks Canadian employment.)

I don't want to sell the point of this post wrong -- overall, I'm a huge fan of Burke, not only in the way he runs a competent team but in the snark he brings to dealing with the media as well. He's done a stellar job in complementing his stars and sheltering the emergence of young kids Getzlaf and Perry. Still, I think his reputation has gotten a bit overblown by hockey media. Burke has his downsides also -- I wish there were more Europeans in the Ducks' system, I think he could have gotten something for Bryzgalov, and he has yet to draft anyone of value -- but those are minor gripes. On the whole he is a level-headed hockey mind, which is certainly a needed element in Toronto and an appreciated aspect from his work in Anaheim. He's free to leave next summer if he wishes, but I'd sure like it if he stayed.

Anyway, this post has gotten a bit longer than anticipated, but as long as Burke keeps the 2009-10 roster pretty clean and doesn't make any suspicious trades this year with the Leafs, I'm cool with him GMing wherever he wants next summer, best wishes and no hard feelings. But hey, maybe that's just my California optimism and I'm not taking this seriously enough; what do you think? Do you believe that Burke craves to be the GM the Leafs (and that they'll hold the position open specifically for him)? And other than the presumption that the Leafs vacancy is automatically more coveted than the Anaheim position, how much does the possibility of Burke bolting bother Ducks fans?

Burkie or no, Go Ducks.

(Side note: Today I stopped procrastinating and finished updating my player spreadsheets -- later this week we'll take a glance at some familiar-feeling Niedermayer and Selanne retirement decisions that are due pretty soon. Feel free to guess on those outcomes, too.)