Is There A Draft In Here?

Share All sharing options for: Is There A Draft In Here? 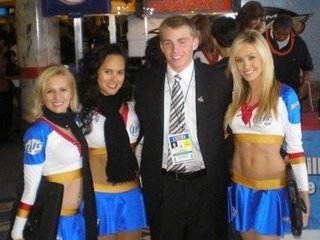 Can you guess which one doesn't have a vagina? It's a trick question.

The NHL Entry Draft is less than a week away and holy Me and am I excited. I mean, c'mon! It's the draft! I am admittedly a draft junkie and will watch drafts of any type (I even used to do Ninja Turtle drafts with my brother when I was a kid... okay, last week), but the NHL Draft is by far my favorite. There are 3 things I love about the NHL Draft: there's intrigue, it allows you to dream about your team, and there's lots of young bo- wait, don't mind that last one. It's lost a little bit of its appeal lately as I notice that these kids are getting younger and younger and by extension I'm getting older and older, but I still love it. 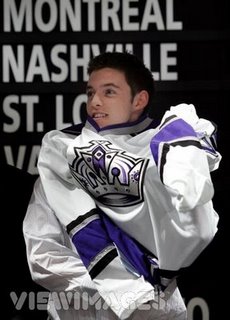 Last year, Dean Lombardi famously caused the Greater Los Angeles area to collectively shit their pants with his selection of Thomas Hickey 4th overall. Hickey played well this year and assuaged some of our fears (although you still have to think that Karl Alzner would fit in excellently alongside Lubomir Visnosvky), while his 2nd round picks (Oscar Moller and Wayne Simmonds) have worked out beautifully thus far. Pretty much every pick from last year took a step forward this year:

I'm probably not going to do player profiles of possible draft picks like I did last year because 1) you can find the information fairly easily at Hockey's Future, and 2) Dean Lombardi ended up picking some guy I didn't profile. The Kings need a defenseman, obviously, and Zach Bogosian and Drew Doughty both look like they can really help the Kings. Bogosian is a bigger American kid who would fit in well with our defense as it looks to be composed for the next few years, while Doughty carries a lofty reputation (I've heard "Coffey" a few times) and an underrated defensive game. (I'll compare the two more later this week.) There's also rumors Nikita Filatov, the talented Russian, could be taken by the Kings, but I think that is just a smokescreen laid by Dean Lombardi to get one of the two teams directly behind him to trade up. I've been burned before, but I'm fairly confident that either Bogosian or Doughty will be putting on a Kings uniform Friday night.

The Kings have 15 picks in this upcoming draft, with 8 of them in the first 3 rounds. I feel fairly confident that Dean Lombardi has put in more hours preparing for this upcoming draft than any other GM in the NHL. I don't think any other GM actually goes out on the road to scout prospects, but Dean does. Last year, with 10 picks and a brand new staff, Lombardi was able to pull in a very good draft class. I couldn't possibly predict what's going to happen this week, but there are 2 things I can guarantee Dean Lombardi will do:

1) He will move around. With 15 picks, Lombardi will definitely have the opportunity to move around, and we know from his San Jose days that he's not afraid to move up or down to get the guy he wants. The Kings have the 28th and 32nd picks, which Lombardi could use to move up in the 1st to get a guy he wants. The Kings should be active this draft.

2) He will focus on one area to draft from. Dean Lombardi is a smart guy, and he knows that there are areas that are undervalued by traditional draft. He usually finds that area and drafts from it, thinking that he's getting 2nd round talent with a 3rd round pick. When he was with San Jose, Lombardi focused on non-traditional European countries, while last year he focused on the WHL. I don't know where he's going to focus on this year, but you can usually see a trend at the end of the day. 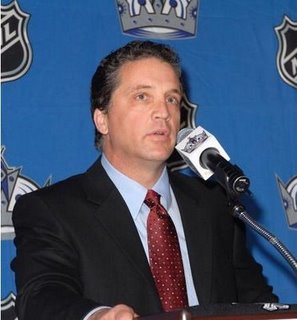 
I'll be here all week passing on the latest rumors leading up to the draft. I'm pretty stoked because I have a feeling the Kings will make some waves. Dean Lombardi has had a few failures during his time as Kings GM, but he owns the draft. The draft is his home, where he feels comfortable and where he is better than any other GM outside Ken Holland. This draft is what he's been building towards since he took over as Kings GM, and I think he's going to rock it. Should be fun.