Is the writing on the wall for Schneider-man?

Share All sharing options for: Is the writing on the wall for Schneider-man? 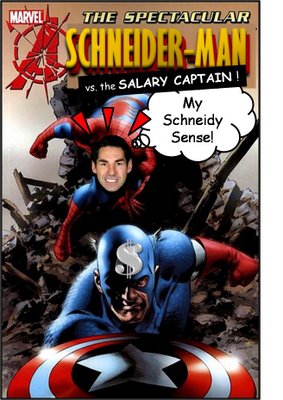 Well, likely in the next week or so we should get a better handle on what's in store for next year's Anaheim squad, but if my salary cap math is right, the prospect of the Ducks keeping Schneider-man this year looks shaky at best.

Still, I think it's worth writing a post to point out that aside from timing, the Schneider and Bertuzzi situations are completely different. Mathieu Schneider had a great year on Anaheim's blueline last year, whereas Bertuzzi's year was a flop, and here's some Behind the Net stats to help show Schneider-man's side of the story.

So in summary, I think the main message I want to emphasize is that unlike Big Bert, Schneider-man did earn his money last year. He dazzled well enough in the easy minutes he was given, but even so it seems like the "best blueline evah" experiment may come to an end. Even with the cap escalating, Schneidermayer doesn't seem like an affordable option to keep as the team's third-highest-paid defenseman, especially considering the timing of the Getzlaf and Perry raises.

Even though I tend to speak fatally as to Schneider's Duck future, I should stress that I'm playing GM from an internet's distance -- who knows what silliness Brian Burke has in store? Perhaps he's pursuing a different angle to hit the budget another way -- a solution that I don't have enough imagination for. As the numbers show, keeping Schneider is a fine option if it's affordable, so I'll let Burkie do his business and see what emerges. Now at least we have a salary framework to think about; let's see some Burke magic.