The Kings are probably going to be pretty quiet this off-season. They have claimed that they're going to make a commitment to youth (thank God), so it's likely that the forward spots are going to be taken up by guys from Manchester. Goaltender is also pretty well sewn up, what with Labarbera healthy (for now) and Ersberg soon to be locked up. Bernier, Zatkoff, and Quick are all there as well, ready to step up and give the Kings an actual third option in case one of the top two guys get hurt. These two areas are pretty set, for better or worse.

Defense, on the other hand, needs a little work. The Kings have Lubomir Visnovsky, Jack Johnson, Tom Preissing and Peter Harrold under contract for the upcoming season. That's 4 spots, spread out like this:

It's common knowledge that the Kings are going to sign Rob Blake this season, hopefully for about $2.5 million dollars. Here's what I don't know: where the hell is he going to play? The Kings put him with Jack Johnson at the end of the year but they probably won't want to do that again because they want Johnson playing on the right side. He could play with Lubo, but that leaves a pretty big hole on that left-hand side next to Jack. What the Kings need is a defensively responsible left-side defenseman, who can play with Johnson in a shutdown role and also play on the penalty kill. There's only one guy I know who fits that description: Mike Commodore. 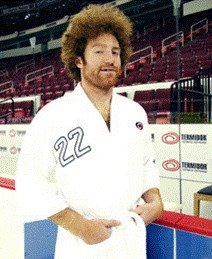 Mike is 28 year old and played most of his career with the Carolina Hurricanes before getting traded last year to the Ottawa Senators. He didn't play that well with the Senators, though, so he's going to be available on the free agent market. Commodore is big (6'4"), not afraid to get dirty, and is unique. A team like LA could use a giant red-haired defenseman. He gets caught out of position sometimes (like every defenseman not named Lidstrom) and he doesn't provide any offense, but the Kings don't really need him to. Signing Mike Commodore would make the Kings defense a lot better because he would fit perfectly.

These are the main obstacles to signing Mike Commodore:

He would require a longer deal. The Kings already have Lubo and Tom Preissing signed to multi-year deals and might be handcuffed in the future when guys like Thomas Hickey and Colten Teubert start moving up. The solution to that? Well, I don't really have one, other than to say, "Who cares?" If we have a young defenseman ready to move up, well then we just trade Tom Preissing. He's a Puck-Moving Defenseman® and has a good contract, it'd be easy to let him go.

He might cost too much money. The Kings need to be very careful about how they spend their money in the coming years; if guys like Jeff Carter can make $5 million dollars a year, how much can Patrick O'Sullivan get? Dean Lombardi may choose to not sign anyone because it puts the future of the team at risk, and I guess that might be the right thing to do. I don't know how much Commodore would cost, but I'd say about $3 million a year could do it. That's about double what he made this year and before you scream that it's too much, bear in mind that Brad Stuart got $3.5 last year. 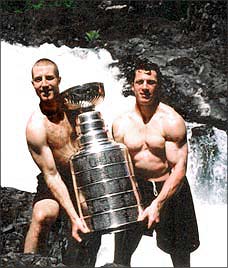 
He probably wouldn't want to play here. And there's the rub. Los Angeles has never really held much cache for free agents (or at least the right kinds) and Commodore may spurn the Kings in favor of a team that, you know, might actually make the playoffs. However, the Kings are a team on the way up (because they can't really go down) and maybe that can lure Commodore. Plus, Commodore is a showman and Los Angeles is quite the stage. Being a fan favorite in Los Angeles is better than anywhere else; hell, watch how much money Ronny Turiaf is going to make this off-season. I hope Commodore looks deeper than last year's standings when making his decision.

So, there you have it. The Kings should sign one free agent this off-season (well, two if you include Blake) and that free agent should be Mike Commodore. He fits the Kings' needs perfectly and he gives the team some personality. He's young enough to be a part of the team when they make the playoffs and he'll provide some size and edge to a defense that sorely needs it. Hopefully he'll want to sign here and we can welcome "The Ballroom" to Los Angeles.


(If you're wondering why I didn't mention Drew Doughty, who will probably make the team next year, it's because I doubt the Kings will put him into a major role next season. He's 18 and I think having him play with Rob Blake would be a little too much. I see him rotating with Peter Harrold and Tom Preissing on that third line. Despite what some people have said, Teubert won't make the team and will play in Juniors for another season. Hickey probably will too, which sucks for him.)