Well, last August and last January I put together a graph showing post-lockout scoring trends, and seeing as we’ve got another full season under our belts I figured it was due for an update. This graph separates each regular season into 27 weeks, each representing something like 45 games played. For each week, I’ve captured the average number of goals, power play goals, and power play opportunities (multiplied by a 1/6 conversion factor, which approximates PP efficiency). 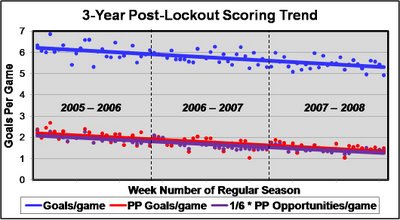 Really, there’s nothing new to report: goal-scoring continues to decline on a fairly linear path as power play goals decline, following the steady decline in power play opportunities (I'm not going to explain the decline in whistles in this post -- call it "player adjustment" or "relaxed refereeing" -- it doesn't matter to me).

So with that in mind, here's a couple of questions I've been mulling:

If you look at the graph, the distance between the blue and red lines stays remarkably consistent over the 3-year period. One thing that hasn't been changing a great deal has been non-PP goals scored per game. Still, context matters here. From one end of the timeline to the other represents a difference of about six power play opportunities per game. That's some nine minutes (or so?) of extra even-strength time per game, with hardly any extra even-strength scoring to show for it.

Two explanations to point to for the declining rate: a) Coaching mechanics. Obviously with the new rules, there was an adjustment in 5-on-5 defense, and though it took some trial and error, generally teams know how to play a consistent even-strength game these days. For the most part, it involves keeping plenty of people back. b) Coaching focus. This is probably slight, but with more games being decided on the power play, the importance of 5-on-5 production lessened. Goal prevention was certainly still important, but a system that produced goals wasn't so critical.

2. How far can this trend continue? Could the "New NHL" with its hyped-up offense-friendly rules end up lower-scoring than before the lockout?

This question is interesting to me on a lot of levels. I had been considering the '03-'04 season as the lowpoint benchmark in scoring rates, and was curious how improved the "new rules" scoring would be once coaches and players had adjusted. It hadn't really occurred to me until today that the lowpoint may still lie ahead.

But why not, really? I mean, I don't really expect referee whistles to slow down any more, but can coaches tighten up even more 5-on-5? They've been improving on that for three years now, who's to say it comes to a stop now?

3. Is the NHL product more (watchable / exciting / dramatic) than it was two years ago? Five years ago?

Here's really where my questions have been leading, and I think it's an important question to answer honestly. Stats and numbers are nice for setting a framework, but really they can't capture why we watch hockey. And they really have no business telling us how "exciting" hockey is or isn't -- that judgment is up to our eyeballs and heart.

I'm not entirely sure where I stand on answering this question, but I think it provides a good lesson in the tradeoff aspect of new rules. Create a rule that is designed to make defending more difficult and there may be a short-term boost in scoring, but unless goal-prevention is made less important coaches will find a way to adjust. In this case, I think the new rules have taken a gamble aspect away from hockey -- in defending against a possible two-line pass and concentrating on defensive body position, teams have held back probably more safely than I'd prefer. Take caution, NHL, in widening the nets as the next scoring solution -- we may see teams pull further back to try to block even more shots, and the result might not be that exciting at all.

Anyway, I don't have a ton of hard answers or solutions, but I did want to show the updated graph and slap a bunch of scrambled thoughts together. Reaction is welcome in the comments, even if it's advice to stop worrying about scoring rates in the summer.