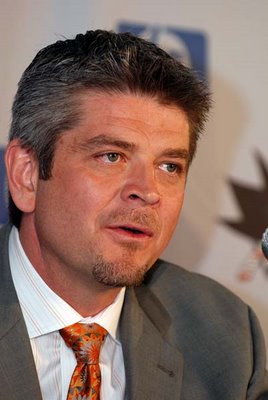 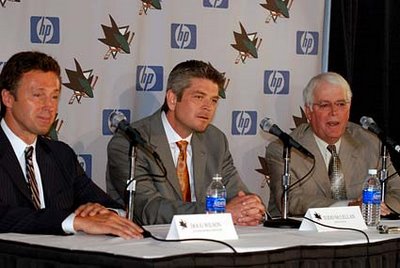 New San Jose Sharks head coach Todd McLellan answered questions 1-on-1 with reporters after the press conference earlier today. He spoke about taking advantage of the depth of talent in San Jose, that he has achieved about as much assistant coaching experience as you could possibly need before moving up to the head coaching position, that a number of factors have to fall into place to win a championship at any level, that a puck possession offense may be a little overstated, that he will try to establish more of a puck pursuit and puck recovery game, and that he would like to encorporate the defense into the offense more.

His opening statment from the press conference, will work on a full transcript on Sharkspage:

"This is a special opportunity, there are only 30 of these positions available in the world. I feel very fortunate to be involved with one of if not the top organizations in the National Hockey League. I am very excited about it. There are some very good things that have happened here in the San Jose Sharks organization. You don't win close to 50 games a year by accident. There is an incredible amount of skill on this hockey team. If you combine the skill with the will, good things can happen. We look forward to doing that."

"It is my job as the coach to push this team, push them hard. Push them outside their comfort zone, and get them doing things that they may not be comforable doing but while I am doing that make sure they enjoy the process. That is the only way championship teams evolve. I look forward to that opportunity and can not wait for it to start."

If anyone has a link to the full press conference video or audio, add it in the comments section. The AP's Greg Beacham, Tony Khing of the San Jose Sharks, and a KLIV reporter asked the questions in the above 1-on-1 clip.

- Martin Brodeur was awarded the Vezina Trophy earlier today. It is hard to overly debate the selection, but it appears as if many of the NHL general managers put their eggs in the reputation and save percentage basket. If you look at wins, goals against average, and strength of conference or even strength of division, then Nabokov should have been the clear winner. There should be no debate that three of the best four NHL teams reside in the Pacific Division, and the fourth won the Stanley Cup. It was a brief aside on the blog at the time, but the start of the Sharks monster February road trip began with rocky losses to the Rangers, Islanders, and New Jersey. Dropping three games on the big east coast stage probably solidified Brodeur's dominance among a few general managers.