Share All sharing options for: "Oh Captain My Captain" Time For Change In the Ducks Locker Room 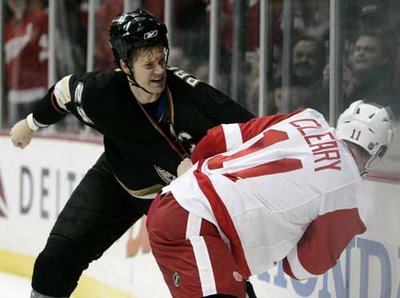 Hey readers of BoC, yep, I'm the new Duck in town, and happy to be here. I just flew in from Texas and man are my arms tired. Ok, now i know how letterman feels...anyway. Yes, I reside in Texas, and yes, I'm a reformed Stars fan. I grew up watching the Stars. But as i grew older i stopped following them, and hockey. Once i got back into hockey, the Ducks became my team. Some may say I'm a Stars fan in Duck feathers, but ill show you your wrong by fall. Although, it may hurt my argument about proving some wrong to make my first post a complaint about the Ducks, i feel many will agree...even Earl and my California writing counterparts. So here goes nothing...

As a highly educated hockey fan, writer and former player, I think I have the right once in a while on certain issues to complain.

My past complaints have been about the trade of Andy McDonald for Doug Weight and a draft pick, and the Ducks early exit from the 2008 playoffs. Now I feel compelled to make it somewhat more personal.

Some may hate me for my opinion, but I feel hockey fans who are for improvement in the Ducks will agree with me. Anyway, on to the point at hand...

Chris Pronger is nowhere near new to being a leader in the Ducks organization, or any other for that matter. He is a fantastic blue liner and a pivotal D-man for the Ducks. His behavior of late though has risen my, along with some others, eyebrows—including the NHL’s.

The latest was a stomp on Canucks Center Ryan Kesler. I watched the video, and having played the game there is no way that was an accident. I would like to believe it was, but come on.

More than just this minor misstep, literally. Chris Pronger has been suspended seven times in his 14-year career. That’s a lot for the captain of a hockey team. Too many if you ask me.

When the Ducks won the Cup in 2007, Pronger found himself suspended twice during that playoff run. Sure, he was not the captain then, but is a guy who makes this many poor choices in two seasons worth being your influential leader and voice between the bench and the zebra (ref)?

Pronger is a leader when he is using the entirety of his brain and not flying off the handle making poor choices. In the last two seasons though, things have gotten out of hand. By this point, some readers are thinking "Well, since he’s so bad who should be captain?"

My pick would be for Rob Niedermayer, the grinding forward who, even with his age, experience, and his placement in the lineup, is a constant force in all aspects of the game.

If the Ducks need someone on the defense in a leadership role, why not give an "A" to Sean O'Donnell or Mathieu Schneider. Pronger can be a leader without a letter on his sweater and he shouldn’t have one until he can better control his behavior.

I don’t honestly expect a change to be made, but I truly think Rob deserves a chance, more than just an "A" on his sweater. He deserves the promotion and even more he fills the role like it is supposed to be filled.

Look at Patrick Marleau. He hardly ever does something stupid and he’s a positive influence for the Sharks.

Brenden Morrow for the Stars is the same deal, an emotional force that leads his team by example, both in the physical game and scoring game, winning goals to lead his team to the Conference Finals. While Pronger’s example is to stomp on guys and elbow them to gain a suspension from the NHL.

As some will have noticed, I skipped over Scott Niedermayer and Teemu Selanne, who although are leaders, need to let someone with a longer future with the Ducks take the role.

Selanne or Scotty would be fantastic captains, but until they decide on their futures in hockey, they need to focus on other things rather than being the emotional leaders. They fill those roles without the sweater designation.

If Pronger does keep the "C," I hope his behavior will improve so he will be a leader and not a distraction.

Emotion on the ice is a powerful thing, but Pronger is like a tea kettle—he boils over too often. If his teammates truly feel he is the captain they need then so be it, but maybe they should really think about a change for the 2008-2009 season.