Other Sports are Ridiculous

Share All sharing options for: Other Sports are Ridiculous 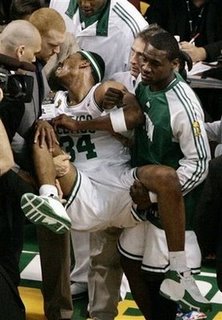 Haha, basketball players are pussies. This, of course, is from last night's NBA Final, where Pierce had a booboo on his knee and acted like he was going to die. I think the fact that Paul Pierce came back later in the game made it worse, because if you're going to flail and cry like that you better need hours upon hours of surgery. The guy who got his arm shot off in the beginning of Saving Private Ryan didn't cry like that. I haven't been this embarrassed for a basketball player since Dwyane Wade separated his shoulder and needed a wheelchair to leave the court.


"I don't really care, [Tiger] said with an impish smile. "It's all about the Dodgers. I don't think anybody really watches hockey anymore."

Dude, you play golf. Shut up. This is like if the captain of the Chess Club talked shit on the wrestling team because he won the 34th annual Chesstopia! competition. It doesn't matter how popular you are, and how many little green jackets you win, because you still play golf and are therefore a huge pussy. Golf is what real athletes play to relax. And as long as this guy is a competitor in your little game, I don't think you have the right to say anything.

And we all know that nobody wants to watch the Dodgers right now, because they are terrible. Shouldn't he root for the Angels, anyway?


The Kings traded TJ Fast to the Blues for a 5th round draft pick. Fast was a 2nd round pick in 2005 (is it sad that I knew that without looking it up?) and played well for the Tri-City Americans of the WHL this past season. This is one of those weird inexplicable trades that happen every once in a while, of which Brian Burke is king. Is Dean Lombardi doing John Davidson a favor so he'll owe him in the future? Is Dean clearing up roster space for the plethora of draft picks we have in the upcoming draft? Am I thinking way too much about the trade of a marginal prospect? The answer to all the above is "yes." Another question with a "yes" answer: am I gorgeous?


And I'll keep this short, because I know you people don't care: Britain is old and rainy and they call their bathrooms toilets, which I feel is a little uncouth. Norway has a ton of tall hot blonde chicks and is sunny for 21 hours a day. And I saw a fjord, which is the greatest word ever.