Predicting the next Kings coach: look out for Boudreau 2.0

Share All sharing options for: Predicting the next Kings coach: look out for Boudreau 2.0 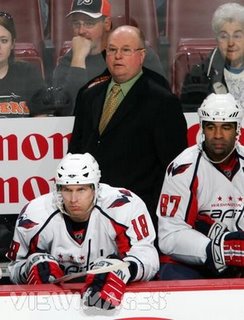 So much of sports management is about running after trends. Every NFL coach would prefer a quarterback who can run like a running back. Lower budget baseball teams feel like they can survive because of MoneyBall.

It happens all the time.

And that's why the Los Angeles Kings might end up looking for Bruce Boudreau 2.0. Indeed, if a trend holds true at least one NHL team will probably promote a highly successful AHL coach with the hope of Catching the Next Rising (Coaching) Star.

There had to be a few GMs deeply intrigued by the concept of under-paying a (usually) younger, harder working prodigy/super secret Herb Brooks-type mind. (This would replace the old standby: sign a big name who almost certainly is running on fumes at this point)

Just looking at the playoffs, there were of course the Washington Capitals making a late season surge with Boudreau. Not to be outdone, John Stevens' Philadelphia Flyers managed to be the only true Cinderella team of this year's playoffs. 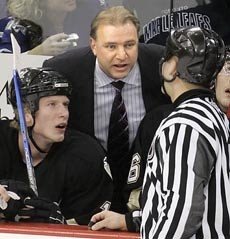 Despite his sort of Shrek-like features and Crawfordian line changes, Therrien is a success


Some people think that coaching the Penguins would be about as intellectually challenging as changing a tire, but Michel Therrien was able to guide the team to a 2nd seed in the Eastern Conference despite having their two no. 1 picks out for huge chunks of the season.

Maybe the minor leagues are going to be a GMs equivalent to a Gold Rush and the next guy promoted will end up being in over his head. Or maybe the Kings will go for another glitzy, potentially overrated coach in John Tortorella.

But don't be shocked if someone gets called up to be the next Kings head coach...