Requiem for a Madman

Share All sharing options for: Requiem for a Madman

As you all are well aware, I wasn't Marc Crawford's biggest fan. I famously (I think it was mentioned on Nightline) called for Crawford's head near the middle of last season when he claimed that the Kings had played their first poor game in months... right at the tail end of a 10-game losing streak. I've softened a little bit since then, but I am still happy with this move. Crawford just didn't mesh with this team and an injection of new blood will hopefully get the whole squad setting their sights a little higher. 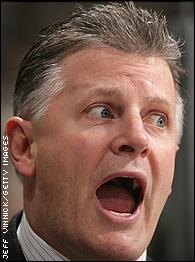 My biggest problem with Crawford, obviously, was his obsession with line changes. He constantly double-shifted his best players with the 4th line, a move that was not only ineffective but wasted the talents of our top guys. In contrast, Randy Carlyle will shift his 4th line guys with his top 2 lines when he wanted to give a player a rest. For example, take this line-up configuration:

Crawford would shift O'Sullivan with Ellis and Willsie, or Brown with Ivanans and Ellis. This shifts the top line player's role (Brown, for example, goes from getting to the front of the net to playmaking) and renders the entire line ineffective (because it doesn't matter how well Kopitar sets up Ellis, he ain't scoring). Carlyle would shift Ivanans with Kopitar and Brown, allowing the other two to work together while the 4th line player can work around them. It's subtle and the players end up playing the same amount of minutes, but it makes the Ducks a lot better and it's something Crawford never did. 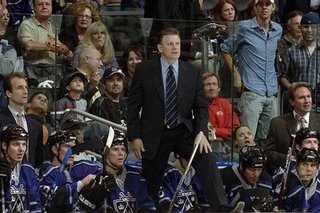 "Nope, can't see my career from here either."


Another problem was that Crawford never seemed all that happy with the Kings. He constantly complained that the team wasn't experienced enough, acted like the team was fine when they obviously weren't, and just kind of looked pissed all the time. (I think he always looks like that, though.) I mean, Andy Murray showed more emotion behind the bench, and Andy Murray looks like a wax figurine. I don't know where Crawford goes from here (I personally think he'd make a helluva junior coach if people can get passed the whole, you know, taking out a hit thing), but hopefully he can find a place that makes him happier than he was in LA. 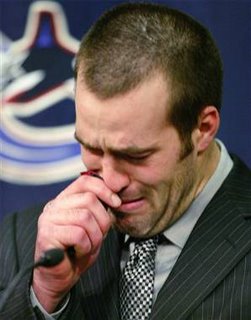 Finally, Crawford's system worked in theory but not in practice. On paper, the Kings do seem like they'd benefit from a coach that encouraged wide open play, but in reality they were often out of position and failed defensively. Forwards didn't backcheck enough, defensemen were misused, and goalies were often hung out to dry. The Kings are going to score plenty no matter what coach they have because they have talented forwards; they need a coach that can shore up the defensive part of the game.

So, where do the Kings go from here? Marc Crawford was an interesting coach because he was offensive-minded but he was also a dick. A coach that would be the opposite of him would be Ron Wilson, who's laid back and an excellent defensive coach. I won't bother you with a rundown of the coaching options because frankly I have no idea who Lombardi is looking at. Tortorella would be nice because he's proven to be a good coach and both he and Lombardi are Italian (Italians are easy to mock), but maybe he's already looking at San Jose. Whoever the coach is, his first priority should be fixing Lubomir Visnovsky. Lubo blossomed under Andy Murray and he needs someone who will work around him and not the other way around. Hopefully he'll work with our secondary young guys (Purcell, Boyle) and instill defensive responsibility into them. Finally, the Kings desperately need to cut down on the number of shots they allow.

Wins would be nice, too.