Share All sharing options for: Saying Goodbye to Lubo

RK: Okay, Lubo, here we are. Go on, get out of the car.
Lubo: Voite for Lubo!
RK: Alright, now go.
Lubo: L-Lubo?
RK: This is your home now, Lubo, you'll be free here. There's lots of forwards to play with and you won't be tied down like you were in LA. It's for the best.
*Lubo takes step towards the car
RK: (teary-eyed) Please, Lubo, this isn't easy for me. Just go and be happy.
Lubo: Lubo!
RK: Go on, git! I never liked you anyway! You're too small and you always have a whimsical look on your face!
*Lubo whimpers and runs off
RK: (whispers) I love you. 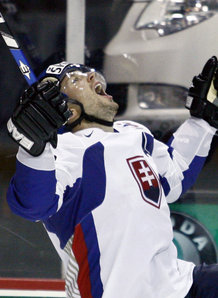 Like most Dean Lombardi trades, this one left me extremely confused. With most Lombardi trades, though, I'll usually feel better about them an hour or so later; that didn't happen with this one. You know how a kid feels when his best friend moves away? That's how I feel right now. Rationally I'm pissed because Lubo was one of the best players on the team and emotionally I'm pissed because he was the sweetest guy ever.* Lombardi always talks about raising kids to be Kings, and then he turns around and trades the one veteran brought up through the Kings' system? Not to mention that he traded him to Siberia 48 hours before his no-trade clause kicked in. That's harsh.

*Plus, I was going to write a fake interview with Lubo this summer wherein he would claim he runs the Kings and stabbed Sean Avery in the spleen. It needed work but it would have been good stuff. Now you're going to get some half-assed routine about Drew Doughty being fat. Thanks a lot, Dean.

I loved all the little things about Lubo: the way he snuck in the back door to rocket a one-timer on the power play, the surprised look on his face when his teammates congratulated him after a goal, everything. There's an awesome scene in Luc Robitaille's FSN show (the one that features his last game) where Luc's on the team plane and comes upon Pavol Demitra and Lubo playing cards with Craig Conroy and Jeremy Roenick. They talk for a bit and then Lubo says something to Pavol in Slovakian and they both burst out laughing. Nobody knows what they're laughing about though, so Robitaille looks uncomfortable and then just kind of moves on. It cracked me up. 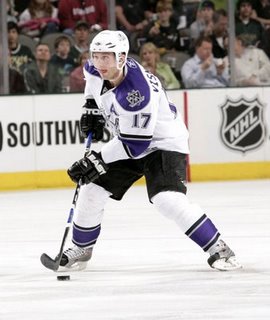 
The Kings got two fairly good players back in the deal: Jarret Stoll and Matt Greene. Stoll is a typical Lombardi pick-up, a character guy with a lot of skill that has been sidetracked by injuries (in his case, a concussion). He's got a good shot and can play both power play and penalty kill. He will center either the 2nd or 3rd line, depending on how they decide to use Handzus. Best case scenario: Stoll gets his game back and pots thirty goals while playing with Frolov. Worst case scenario, or what will happen because it's the Kings: he continues to suck and he and Handzus team up to form the worst 2nd center combo in NHL history. Also, Stoll is dating Rachel Hunter, so I guess my dad will have someone to look at during the game. At the very least this means Tom Preissing will have a shot with Tawny Kitean.

Also picked up was Matt Greene, who is a monster. Greene is a big defenseman and offers absolutely no offense. Basically, think Aaron Miller. He takes too many penalties and his lack of offensive skill kills a lot of his worth, but he's what the Kings needed. I don't know who he'll play with because the Kings aren't done with their defense, but he should anchor our penalty kill for a few years to come.

I would still rather have Lubo over those two players, although they do fill a big need for our team. The only way I'll be happy with this is if the Kings turn around and trade for Jay Buowmeester. It's unlikely, but the Kings have been trading for a lot of guys in that 23-25 range and they did draft a number of 20 year-olds this last draft that would replace any prospects we trade. If their plan is to sign Brad Stuart again, I'll flip. A defense consisting of Jack Johnson, Matt Greene, Rob Blake, Brad Stuart, Tom Preissing and Drew Doughty does not fill me with excitement. And it could never replace Lubo. 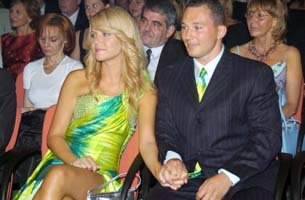 
If I could have a quick word with Edmonton fans: look, I don't like you and you have a grudging respect for me, but go easy on Lubo. Don't put a lot of pressure on him just because you're paying him $7 million dollars next year. I know you'll get frustrated because he's small and he'll never work the puck out of the corner, but he means well. He tries hard and he's very sneaky and he and Souray will give you a fantastic power play. Treat him well and make sure he gets plenty of vitamins because if you don't watch him he'll just eat candy and get a tummy ache. Oh, and here's his ear medicine; make sure you give it to him before he goes to bed.

Well, I guess that's it then. I guess I'll leave you with this: