Let's open this discussion with a statsy look at the 2007-08 Ducks season, broken down into four segments, with explanations below:
Segment 1 is the first 34 games of the season played without Niedermayer or Selanne. It is a bit skewed by travel, however, as it opens with a six games in five cities in twelve nights stretch where the Ducks flew 11,667 miles, which is pretty far even for an actual duck. It is also skewed because it featured 17 games of Mark Mowers in a scoring role, which was predictably awful (and frankly, contributed to the trading of Andy Mac). The Segment 1 team was fairly mediocre, with some obvious excuses. The penalty kill was atrocious, with no real excuses.

Segment 2 marks the return of Scott Niedermayer, which sparked a phenomenal turnaround for the Ducks. This segment is a bit skewed because it ends with the infamous "Six Games of Suck", when the Ducks scored only five goals in six straight losses after starting the new Niedermayer era 12-2-2. Still, for the most part the team stats were vastly improved, especially the defense and the penalty-killing.

Segment 3 marks the return of Teemu Selanne, who at least saw an end to that offensive drought. This is the stretch that I really turn to when I want to defend against naysayers who think that the moves Brian Burke made last year were shit. If you look at Segments 2 and 3, it's a top-notch team, and Scott and Teemu were probably the two best players over that stretch. Burke certainly had to jump through hoops to enable their returns, but it’s tough to argue with these results, at least.

Segment 4 begins with the first game of Chris Pronger's suspension, and includes the short postseason. This is a sort of sloppy cut, because the Ducks were able to go 7-2 to end the regular season, but Pronger's absence did I think sort of derail the team in preparing for its cup defense. This segment also signifies the injury to Corey Perry, which was also a huge factor and occurred just a few games before. I probably shouldn't have included the playoff games, but they did feature both Niedermayer and Selanne.

I apologize if I've over-explained these segments, but it was a complicated year. Last season's Ducks had lots of lineup variations and strange storylines, which is a far cry from the cup-winning year. That year, stability was the norm: eight of the top ten Ducks forwards played in all 103 games. Still, I did want to break out these segments to make a few quick points regarding Scott, Teemu, their importance to the Ducks, and the ugly monster known as retirement. 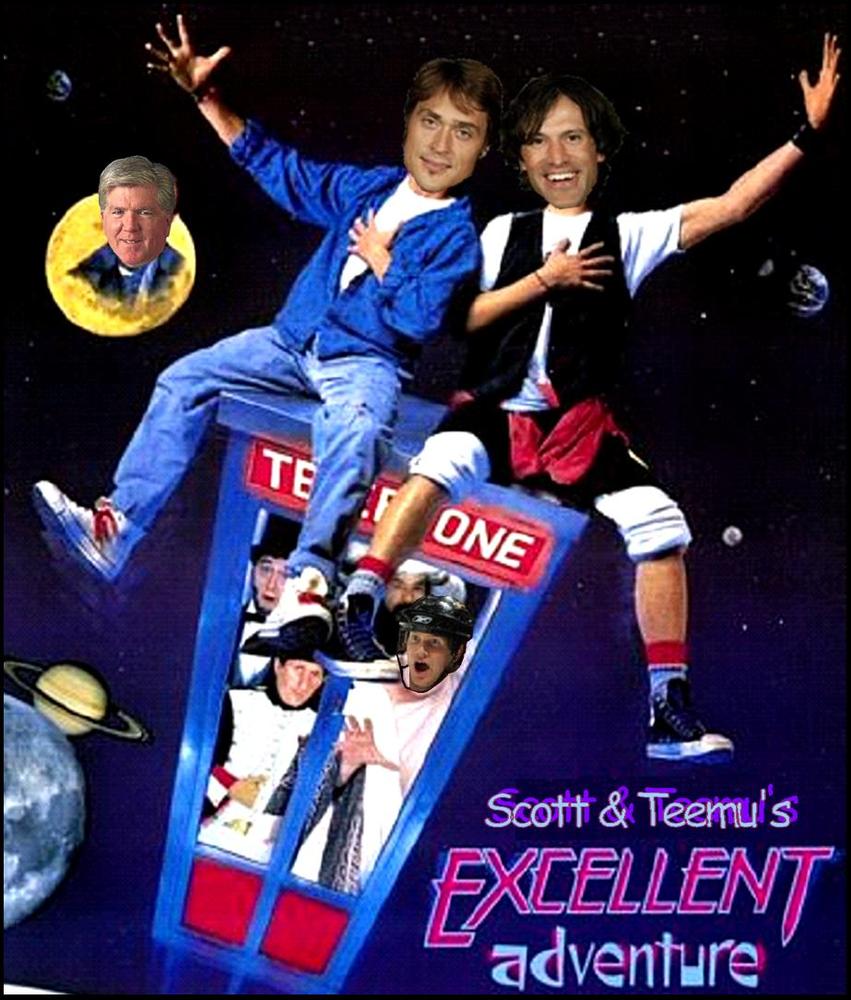 1. Scott and Teemu certainly can still play, contribute, and win. They were probably the two most impressive Ducks to me last year, both in sheer talent and in their ability to fix a bleeding lineup. I think I’m going to do a separate post about the contributions of each of them, but here’s the gist: by inserting talent at the top of the lineup, defensemen and forwards were able to fall into more logical roles, and the Ducks’ performance improved dramatically.

Even more so, I'd add that their delayed seasons weren't the problem at all with the Ducks’ early exit last year. It certainly hurt when Andy Mac and Breezy were squeezed out, but I'd argue that the delayed seasons by Niedermayer and Selanne helped the Ducks' chances of repeating. It enabled a roster to be assembled by the postseason that probably wasn't affordable for a full 82-game schedule.

Of the two, I’d argue that just like last summer, the retirement decision of Niedermayer means more to the success of next year’s team. You can read through my Mr. Incredible post to see some of the statistical impact of his return, but the difference between a one-Norris team and a two-Norris team is incredible; two years ago Pronger vastly improved a Niedermayer-led blueline, and last year Scott returned the favor. I don’t mean to undersell the importance of Teemu, a master in the offensive end and on the power play, but if I had to pick one player to return, it’d be Scott.

2. I don’t think either player retires this week, but I’m an optimist. I have no insider information, and I know a lot of Ducks fans have different theories, but I just keep coming back to this fact: here are two guys who had something like six months to get off the retirement fence last year, and neither one could make the call to end their careers early. Why should I expect that their inability to retire has changed, especially given their excellent play last season?

I know that squeezing them into this year’s budget will be a hurdle, but I think both players have a strong sense of their on-ice importance to the Ducks, and I suspect we’ll see both re-assume their roles for training camp.

3. If Scott does not retire, it’s time to move Schneider. He was my first choice to be shipped out when Scott unretired last year, as it didn’t really make sense to keep both Scott and his apparent replacement, especially at their salary levels. I don’t want to overly knock "Schneidermayer", who even took home some wayward Norris Trophy votes for his easy-minute dominance, but here’s the reality:

Giguere is making $6M, and Pronger and Niedermayer combine for another $13M, and assuming they’re all willing to play, none of them are going anywhere. Schneider’s additional $5.625M salary commitment becomes excessive at that point, because frankly, there’s not that many more minutes available for him to earn or exceed his dollar value. Instead, that money is needed to shore up the forward ranks, both in paying Getzlaf and Perry’s raises, as well as finding some scratch to pay UFA Selanne.

In a lot of ways, the Ducks are painted into a corner in what they can do this offseason—if Niedermayer and Selanne are in next year’s plans, there are more salary commitments than the Ducks can afford, and we may see Brian Burke get trade-active on draft day ("I’ll trade you the rest of that sandwich for Todd Bertuzzi."). Still, I’m pretty excited for what next year’s squad can do, in what might be the swan song for the Niedermayer-and-Pronger Ducks. I still can’t believe how fortunate we’ve been to see these two different-style all-stars patrol the blue line the last couple of years, and if there’s one more shot at seeing it, I’m fully aboard.

More stats-crunching and salary-talking to come as these retirement decisions become known, but for now, Go Ducks.