So, Battle of the Pacific?

Share All sharing options for: So, Battle of the Pacific? 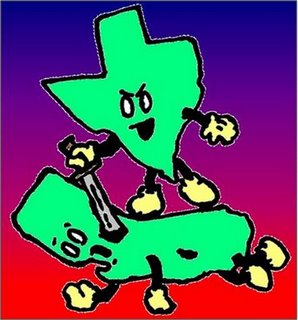 Well, I guess I should get back in the blogging game here at BoC, and what better topic to come back on than official blog business? Specifically, while I’ve been distracting myself with GTA4 and Galactica after the Ducks got eliminated, James O’Brien has been offering thoughts on the Dallas Stars most of this postseason, and has been as subtle as a Pronger-elbow-to-the-head in hinting that this blog should be renamed "The Battle of the Pacific" in the not-too-distant future.

I’ve gone back and forth on this issue, and I think in the end I’m against the notion of blog re-branding at least at this point in time, though I am willing to listen to counterarguments in the comments. For one, there’s the matter of blog contributors—if this blog’s purpose is to be a somewhat even-handed approach to the Pacific Division, that would require definitely a strong Coyotes voice and possibly even another Stars voice—and I’m not even sure that this blog has a glaring need for any more regular contributors.

Secondly, from a technical standpoint, I’m not the savviest blog administrator on the internet, but I do put a huge priority in preserving this blog’s archives. I’m confident that Blogger has the capability to mass-transfer old BoC posts to a new "Battle of the Pacific" domain, but I really don’t want to go around and try to get other sites to update old links, whether in blog listings or in actual posts.

Also, I think I have a bit of a philosophical hurdle to overcome. While the Stars perspective is certainly relevant to the BoC’s Pacific Division standings, there are still some geographical differences that continue to differentiate fans of the two teams, namely two time zones—nobody on the east coast is complaining that they have to stay up too late to see Stars games, or that their team has to travel as far west as Texas. I mean, certainly we’ll have similarities being mocked as non-traditional hockey fans, but Texas is nearer to the NHL’s east-coast bias than any CA team will ever be. Maybe it’s just me, but I feel like I empathize with the plight of the Kings fan or the Sharks fan much more than do a Stars fan, and idealistically it’s probably that commonality that this blog promotes.

Suffice to say that there’s a fair amount of work to be done in representing a "Battle of the Pacific" blog, and I don’t think I’m up to it anytime too soon (heck, I’m not sure I’m ready to stop saying "BoC"). Even if Stars and Coyotes posts become regular features, I don’t think that it demands a blog rebranding; accuracy has never been our strong point, why try to start now? So unless I hear of any particularly compelling comments, my plan is to just continue operating under the Battle of California web address, and we’ll continue to write about whatever we want, including opinions on the Dallas Stars.

Anyway, let me open it up to the comments: How important is it that the blog name align with possibly expanded coverage? Also, is anybody interested in supplying Stars or Coyotes posts?

[Author’s note: Earl does plan on covering the Ducks again real soon. First issue to be discussed: why I am not panicking about Brian Burke Leafs GM rumors.]